At the 1999 All-Star Game at Fenway Park, I stood on a packed Lansdowne Street behind the Green Monster during the Home Run Derby and watched ball after ball fly not just over the wall, but over the street and onto the roof of the parking garage. Mark McGwire may have blasted one or two that bounced off the garage and onto the Massachusetts Turnpike.

It was great theater. The sluggers were hitting balls in places never before seen at Fenway Park. It was assumed something was up with the balls — they simply weren’t supposed to travel that far — but it wasn’t a big deal. It was a Home Run Derby and if you want to juice things up a little bit to make the event more exciting, that seemed OK. Plus, this was McGwire in the year after his epic record chase with Sammy Sosa, when he was still king of the sport. It was all good fun.

On Monday, the Arizona Diamondbacks were in Philadelphia. It was a good night to maybe hit a couple of home runs: the wind was blowing out to center field at 7 mph, Citizens Bank is a good home run park and Jerad Eickhoff, who had allowed 11 home runs in his past five starts, was pitching for the Phillies.

The Diamondbacks hit five off Eickhoff in his three-plus innings:

Those were the first three batters of the game. Most of the fans were still in line getting their cheesesteaks and it was already 3-0.

FYI: Eduardo Escobar is really good at baseball. That’s all.@Dbacks up 5-3 in the top of the 4th! pic.twitter.com/6DjpeK9uQZ

Eickhoff allowed five fly balls and all five left the park. All were certainly struck well, but none were exactly crushed or featured an unusual exit velocity, as a typical game features a dozen or so balls in play at 100 mph or higher. Dyson, with 17 career home runs in more than 2,000 at-bats, hit a high-and-away fastball out of the park, not exactly the location you would expect Dyson to connect for a home run. (He’d only hit one other home run in his career off a pitch in a similar location.)

But when baseball in 2019 has turned into a season-long Home Run Derby, these things happen. They’re happening all the time. And it’s becoming a bit absurd.

The Diamondbacks became the sixth team to hit seven or more home runs in a game this season – well, five teams for a total of six times, as the Twins have twice hit eight in a game (so did the Dodgers). And only two of those six games came against the Orioles.

Get this, in the entire decade of the 1990s, when half the league was supposedly using steroids, there were 12 seven-homer games. In the 1980s, there were six, so we’ve already matched that total on June 10.

A couple of recent home runs caught my attention. Here’s one from Ji-Man Choi from a few days ago, in which he kind of just flicks his bat at the ball … and the ball goes 394 feet into the Fenway bullpen:

And here are the Nationals hitting four home runs on Sunday. The third one was from Adam Eaton. He’s not a power hitter, with 47 career home runs and a season high of 14, but he kind of one-handed the ball 402 feet to center field:

Those are just a couple of examples and far from the best ones. But let’s be honest here: The ball is a joke. I’m not telling you anything you haven’t seen with your own eyes. Combine the lively ball with some of these cozy dimensions — right field at Yankee Stadium is a joke, Cincinnati feels like a high school field — and the home run barrage is never-ending.

Entering Monday, we were on pace for 6,514 home runs — almost 1,000 more than were hit in 2018 and 400 more than the 2017 record of 6,105. Yes, the launch angle revolution works when you can hit what might have been a warning track fly ball a few years ago and now it lands three rows deep. Take Marte, one of Arizona’s home run hitters on Monday. He came up as a slap-hitting shortstop who hit three home runs his first two seasons. Now he’s a beefed-up slugger with 16 home runs already, including one last week that went 482 feet, one of the season’s longest.

The ball rewards players like Marte or Tommy La Stella who can add strength and rework their swings to hit more fly balls (as long as it doesn’t come at the expense of too many strikeouts or pop-ups that can wipe out the gains in power). But it also means the game has become extremely one-dimensional. Home run or die. Lots of home runs. Maybe too many home runs. Indeed, as I was writing this, Ian Desmond hit a 486-foot home run, the longest of the season:

?LONGEST HOME RUN OF THE SEASON ?

You could call it McGwire-esque. 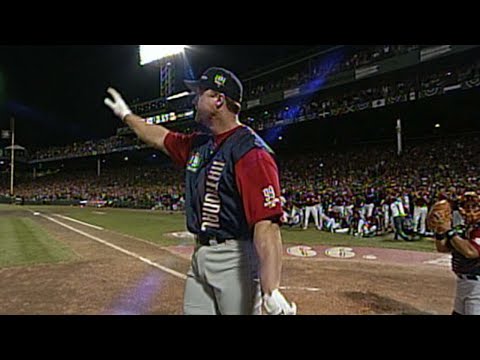 Braves hit five home runs, get into dust-up: The Braves beat the Pirates 13-7 as Ozzie Albies homered twice, Ronald Acuna Jr. hit a grand slam and Freddie Freeman and Nick Markakis also homered. But the big moment came in the bottom of the first when Pittsburgh starter Joe Musgrove clipped Josh Donaldson’s jersey, Donaldson said a few words along the lines of “Don’t look at me” and then the benches emptied:

Benches clear as #Braves‘ Josh Donaldson is hit by a pitch by Pirates’ Joe Musgrove. pic.twitter.com/7xKeHgC9Fn

In the silliness that followed, plate umpire Brian Gorman ejected Donaldson, Musgrove and Pirates manager Clint Hurdle. Musgrove said Gorman told him it was for taking off his hat and glove — even though if you watch the replay, Musgrove didn’t remove his hat until well after both benches had emptied. It seemed a terrible decision by Gorman, especially given that the pitch didn’t really hit Donaldson’s body (just his flapping jersey) and Donaldson instigated the episode with his beef over a pitch that wasn’t even that far inside.

Joe Musgrove on his ejection: pic.twitter.com/SScIX8Dirw

Aside from the home runs and the ejection, the other key was Sean Newcomb’s 4⅔ innings of one-hit relief after Kevin Gausman left early. Newcomb has been very good out of the bullpen since his return from the minors, although this was his first extended outing. Obviously, Dallas Keuchel will take over in the rotation (probably for Mike Foltynewicz), but Newcomb could be a possibility to return to the rotation if Gausman continues to struggle.

Rockies, Cubs combine for six home runs: Hey, just a regular game at Coors Field. Remember the stat about Eickhoff allowing five fly balls and five home runs? Rockies starter German Marquez allowed two fly balls — and three home runs (apparently one of the home runs was classified as a line drive). Anyway, in six innings he didn’t record a single fly ball out. The Rockies won 6-5 with a run in the eighth inning, but the fun, non-homer highlight of the game came from Nolan Arenado:

#Rockies 3B Nolan Arenado and 2B Ryan McMahon pull off a slick play to retire #Cubs Carlos Gonzalez pic.twitter.com/ve9FHf8bJN

Hyun-Jin Ryu allows home run! In this season of the home run, Ryu’s performance feels all the more remarkable. Kole Calhoun’s home run off him was the first Ryu had allowed since April 26, eight starts ago. (He’d allowed just three runs in those seven starts.) That was the only run the Angels got off Ryu in six innings, although he ended up with a no-decision when the bullpen blew his 3-1 lead.

Love Decorating For Fall? You Might Be A Happier Person. Here’s Why.

South Asian Americans Are Coming Out Of The Weed Closet