A family of five was killed in a road accident that left more than 14 travellers dead.

Erick Omondi his wife Ester and their three children, 7-month-old Biden, Judith, 5 and Mary, 10 died yesterday morning while two other relatives and their two friends suffered serious injuries at Samburu area along the Mombasa-Nairobi Highway.

A relative of the deceased, William Okoth, said the victims were travelling to their rural home in Nyakach, Kisumu County for a funeral of their kin.

“We have lost five members of one family. Four others were injured.

“We are planning to have the bodies transferred to Mombasa and the injured to a central place,” Okoth said.

Frederick Ombaka, the Kinango sub-County commander, said the accident happened in the wee hours of Saturday.

“It is quite unfortunate that this accident has wiped out an entire family,” he said while calling on motorists to exercise caution while on the road.

Peter Maina, the Coast traffic commander, told the Sunday Standard the accident happened at about 5am.

He said all the nine victims were in a Nissan Serena which collided with an oil tanker.

Maina said the oil tanker that was going to Mombasa from Nairobi was trying to overtake other vehicles when it collided with the PSV.

Two of the injured were rushed to Coast General Hospital in Mombasa while two others were admitted at Kinango sub-County.

Otieno’s other wife was among those injured.

A medical officer at the hospital, Dr Khadija Hemed said arrangements were being made to transfer the injured to Coast General Hospital. 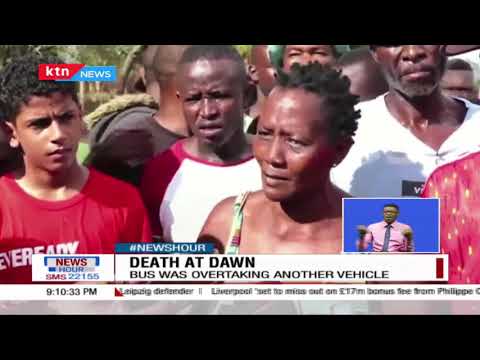 Elsewhere, five people died on Friday night after the vehicles they were travelling in collided at Soysambu Conservancy in Gilgil, along the Nakuru-Eldoret Highway.

Two died on the spot and the others died while undergoing treatment at the nearby St Mary’s Hospital.

John Onditi, the Gilgil sub-County police commander said seven other people are still admitted to the hospital, some with serious injuries.

“We have been informed that survivors are responding well to treatment.

“Emergency surgeries were carried out and the patients are out of danger,” said Onditi.

The 8pm accident occurred after two private cars, a Honda Stream and a Toyota Voxy, collided head-on. The drivers of the two vehicles were simultaneously overtaking two trailers coming from either directions.

Weli Tube, driver of one of the trailers, which was ferrying fuel to Uganda from Nairobi, said he was forced to swerve his vehicle to avoid hitting the Toyota Voxy that was heading towards Nairobi.

“A Honda Stream was overtaking me yet there was an oncoming trailer which a Toyota Voxy was also overtaking. There wasn’t enough space for the two cars to overtake so I moved off the road,” said Tube.

The Toyota Voxy were travelling from Kisumu to Nairobi.

And in Kakamega, four people were killed when a Mumias-bound lorry hit two motorcyclists along Buyangu-Ekero road.

The Saturday 11am accident occurred when the driver of the lorry lost control of the vehicle before ramming onto the oncoming motorcyclists.

Eyewitnesses said the lorry was speeding when its tyre burst near river Firatsi in Butere sub-County.

Butere traffic police base commander George Owour said the four who died were two riders and their two pillion passengers.