The palace announced in November that the Duke and Duchess of Sussex were going on a six-week break from royal duties, which meant they would not attend Christmas with the queen and the rest of the royal family. For some reason, this bothered the British artist.

“I was a bit disappointed that Harry and Meghan have decided not to spend Christmas with the Queen this year. If I was Harry, I’d think there was plenty of time in the future to have Christmases on my own or with Meghan’s mum,” the singer said in a new interview with the Daily Mail published last week.

“The Queen’s 93. I flew around the world to be with my mum and dad at Christmas because I knew they didn’t have many left,” he added. 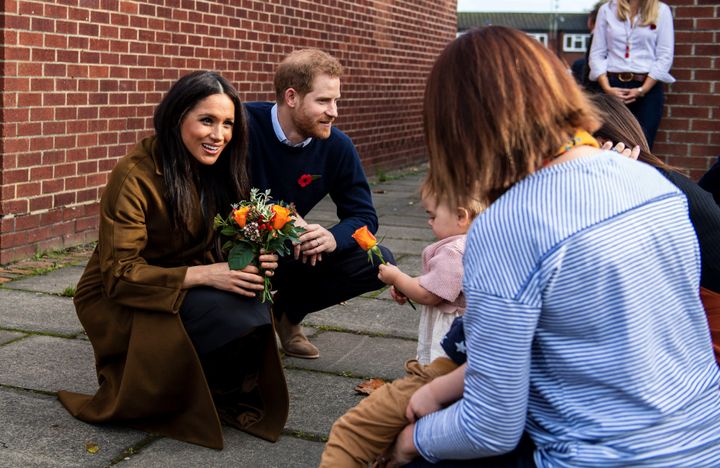 Bonnie and Maggie Emanuel give a posy of flowers to  Meghan during a visit at Broom Farm Community Centre in Windsor on Nov. 6.

Despite Stewart’s disappointment, it seems that the queen is perfectly fine with Meghan and Harry’s decision, according to a previous statement from Buckingham Palace.

“Having spent the last two Christmases at Sandringham, Their Royal Highnesses will spend the holiday this year, as a new family, with the Duchess’ mother Doria Ragland,” the statement said. “This decision is in line with precedent set previously by other members of the Royal Family, and has the support of Her Majesty The Queen.”

After all, Prince William and Kate Middleton have skipped the Christmas celebrations at Sandringham before, to spend time with the Middletons.

The Sussexes reportedly spent Archie’s first Thanksgiving with Meghan’s family, likely meaning her mom ―  Doria Ragland. And due to the timing of the Sussexes break from royal duties, Meghan and Harry missed a palace reception on Tuesday night that saw Queen Elizabeth, Kate Middleton, Prince Charles and more royals welcome NATO leaders to the palace.

Canadian Prime Minister Justin Trudeau, U.S. President Donald Trump, German Chancellor Angela Merkel were among those who made an appearance. But there was a bit of controversy at the reception, as some world leaders were caught on a hot mic reportedly mocking Trump. Princess Anne made waves for seemingly shrugging off an introduction with U.S. president and the first lady.