KYIV, Ukraine (AP) — Russian authorities reported shooting down Ukrainian drones Saturday in Crimea, while Ukrainian officials said Russian forces pressed ahead with efforts to seize one of the few cities in eastern Ukraine not already under their control. The Russian military also kept up its strikes in Ukraine’s north and south.

In Crimea, which Russia annexed from Ukraine in 2014, Russian authorities said local air defenses shot down a drone above the headquarters of the Russian Black Sea Fleet in Sevastopol. It was the second drone incident at the headquarters in three weeks and followed explosions at a Russian airfield and ammunition depot on the peninsula this month.

“Air defense systems successfully hit all targets over the territory over Crimea on Saturday morning. There are no casualties or material damage,” his boss, Sergei Aksyonov, said on Telegram.

The incidents underlined Russian forces’ vulnerability in Crimea. A drone attack on Russia’s Black Sea naval headquarters on July 31 injured five people and forced the cancellation of observances of Russia’s Navy Day. This week, a Russian ammunition depot in Crimea was hit by an explosion. Last week, nine Russian warplanes were reported destroyed at an airbase on Crimea.

Ukrainian authorities have stopped short of publicly claiming responsibility. But President Volodymyr Zelenskyy alluded to Ukrainian attacks behind enemy lines after the blasts in Crimea.

Meanwhile, fighting in southern Ukrainian areas just north of Crimea has stepped up in recent weeks as Ukrainian forces try to drive Russian forces out of cities they have occupied since early in the six-month-old war.

A Russian missile attack wounded 12 people, including three children, and damaged houses and an apartment block Saturday in the town of Voznesensk in the Mykolaiv region, the Ukrainian prosecutor’s office said. Two of the children were in serious condition and the governor said one had lost an eye. 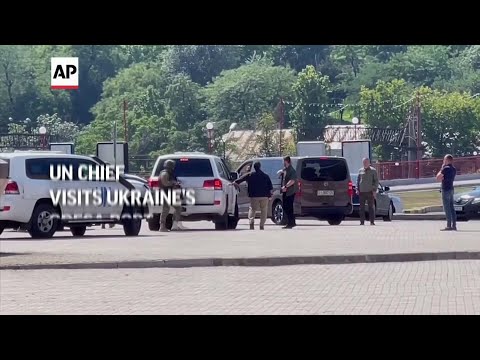 A Ukrainian airstrike, meanwhile, hit targets in Melitopol, the largest Russian-controlled city in the Zaporizhzhia region, 100 kilometers (65 miles) north of Crimea, according to Ukrainian and Russia-installed local officials.

The Ukrainian military on Saturday said it had destroyed a prized Russian radar system and other equipment stationed in occupied areas in the southern Zaporizhzhia region. It was not clear if this was the strike on Melitopol.

“Tonight, there were powerful explosions in Melitopol, which the whole city heard,” the Ukrainian mayor of Melitopol, Ivan Ferodov, said. “According to preliminary data, (it was) a precise hit on one of the Russian military bases, which the Russian fascists are trying to restore for the umpteenth time in the airfield area.”

Bakhmut for weeks has been a key target of Moscow’s eastern offensive as the Russian military tries to complete a months-long campaign to conquer all of the Donbas, where pro-Moscow separatists have proclaimed two republics that Russia recognized as sovereign states at the beginning of the war.

A local Ukrainian official reported sustained fighting Saturday near four settlements on the border of Luhansk and Donetsk provinces, which together make up the contested Donbas region. Luhansk Gov. Serhii Haidai did not name the settlements. Russian forces overran nearly all of Luhansk last month and since then have focused on capturing Ukrainian-held areas of Donetsk.

Ukraine said Sloviansk and Kramatorsk were targeted Friday, along with the Kharkiv region to the north, home to Ukraine’s second-largest city.

Local authorities reported renewed Russian shelling overnight along a broad front, including the northern Kharkiv and Sumy regions, which border Russia, as well as of the eastern Dnipropetrovsk region and Mykolaiv.

In other developments Saturday:

__ Pedestrians in downtown Kyiv took pictures of a large column of burned-out and captured Russian tanks and infantry carriers that was put on display on a central boulevard in the Ukrainian capital. The display comes just days ahead of Ukraine’s independence day on Aug., which also coincides with six months since the Russian invasion.

__The Joint Coordination Center in Istanbul on Saturday authorized the movement of four outbound vessels carrying 33,300 metric tons of food from Ukraine under the Black Sea Grain deal. The ships will leave Ukrainian ports on Sunday. The agency will conduct 10 more ship inspections on Sunday. The deal seeks to get tons of grain exports stuck in Ukraine by the war safely out across the Black Sea.

__ The Interior Ministry for the separatist Donetsk People’s Republic said an improvised bomb exploded near the zoo in Mariupol, which the city’s mayor was to visit, but the mayor was not injured. Mariupol came under rebel and Russian control after months of intense fighting that devastated the city.