Deputy President William Ruto is today expected to announce his much-speculated decision on who his running mate is, ending the guessing game which has persisted for months.

Several of the DP’s associates yesterday confirmed to Newszetu of an event planned for today at Mr Ruto’s official residence in Karen for the naming of the person who will deputise him if he wins the August 9 presidential election.

“Yes, in fact, it was supposed to be today (Friday) but he changed. We met yesterday (Thursday) and he told us that he would announce it on Friday. Then he changed his mind and said it would be tomorrow (Saturday),” Murang’a Senator Irungu Kang’ata told Newszetu.

Tharaka Nithi Governor Muthomi Njuki and Chuka/Igambang’ombe MP Patrick Munene said they had received invitations to Nairobi for the 10am unveiling ceremony. The same was confirmed by MPs Didmus Baraza (Kimilili) and Nelson Koech (Belgut).

“It is confirmed. The DP is naming his running mate tomorrow. I cannot speculate on who it is,” said Mr Baraza.

The deadline for presidential candidates to name and file with the Independent Electoral and Boundaries Commission (IEBC) is at midnight on Monday. Azimio la Umoja-One Kenya presidential aspirant Raila Odinga is also preparing to name his running mate ahead of the deadline, possibly on Sunday at a rally at the historic Kamkunji Grounds in Nairobi or at a special event on Monday. 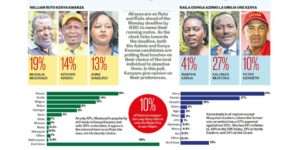 The panel that the Azimio partners constituted to interview potential candidates finished its assignment and submitted three names to Mr Odinga from which he will pick one. Those said to have been shortlisted are Narc Kenya chief Martha Karua, Wiper leader Kalonzo Musyoka and former Gatanga MP Peter Kenneth.

Speculation has swirled around several contenders to be Mr Ruto’s running mate. The publication of the Kenya Kwanza coalition agreement confirmed that the running mate will come from the mountain region as ANC party leader Musalia Mudavadi and his Ford Kenya counterpart Moses Wetang’ula settled for a yet-to-be-created post of Prime cabinet secretary and National Assembly Speaker respectively. 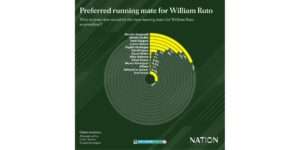 The United Democratic Alliance (UDA) will name both the presidential candidate and the running mate. Consequently, Saturday Nation has learnt that the race could be between Mathira MP Rigathi Gachagua and Tharaka Nithi Senator Kithure Kindiki. Others whose names have featured as potential running mates are Kiharu MP Ndindi Nyoro, Kirinyaga Governor Anne Waiguru, National Assembly Speaker Justin Muturi and Kandara MP Alice Wahome. The buzz around the other names rose, fell and eventually disappeared never to be mentioned again. These were former Agriculture CS Mwangi Kiunjuri and Gatundu South MP Moses Kuria, who are no longer in UDA but formed their own parties, The Service Party (TSP) and Chama cha Kazi respectively.

“I am equally anxious to know who it is. At least we know the region the person comes from,” said Mr Koech. 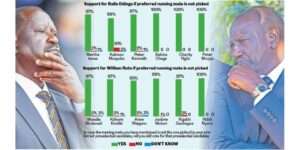 Speaking at a burial in Magumoni ward, Chuka/Igambang’ombe constituency on Friday, MP Munene said the contest is now between Prof Kindiki and Mr Gachagua.

The two leaders urged the DP to go for Prof Kindiki arguing that apart from his qualifications for the position, he also comes from Mt Kenya East which has never produced a leader of such level since independence.

“As leaders, we have packaged Prof Kindiki the best we could and now what is remaining are prayers for the DP to pick him,” he said. According to Mr Munene, even though Mr Gachagua has all the qualifications to be a deputy president, Mt Kenya East should be given a chance to produce a national leader of that rank.

Mr Ruto has avoided making any statements which could give hints at who could be his deputy if he wins in August. If he picks Prof Kindiki, he will be going for a two-term senator who rose through parliamentary ranks very quickly before he became a victim of the fallout between President Uhuru Kenyatta and Mr Ruto.

He enjoys support even from non-politicians from Mt Kenya who have the DP’s ear. However, his main undoing is that he is from the minority Tharaka of the complex Meru dialects. 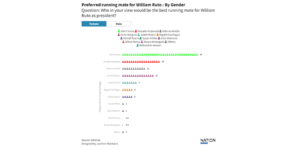 He has lately assumed a prominent role in UDA and had a pronounced role in the party’s nominations. Besides Mr Ruto and the chairman of the UDA National Elections Board Anthony Mwaura, it was Prof Kindiki who was also giving updates on the progress of the nominations. He is also the custodian of the Kenya Kwanza Alliance deal. He witnessed the signing of the deal among the three leaders — Mr Ruto, Mr Mudavadi and Mr Wetang’ula.

In Mr Gachagua, the DP will be taking a risk on a first-term MP who is a good mobiliser. He also has experience in public service having spent considerable time in the civil service. In his time in public service, he served as personal assistant to a former head of public service Prof Philip Mbithi under President Daniel Moi and later played the same role for President Kenyatta when the latter was a minister in former President Mwai Kibaki’s administration.

Being Gabe Kapler: Inside the mind of the San Francisco Giants’ nonconformist manager

Ruto decides: Is it Kindiki or Gachagua?

Fever 101: What to do and when to call a doctor

DCI: Sankok to be charged over son’s death

Can’t Find Baby Formula During The Shortage? Here’s What To Do (And Not Do).