In his petition seeking to nullify the results of the August 9 presidential election, Mr Odinga says that none of the candidates achieved the Constitutional threshold.

The conclusion, Mr Odinga said, was arrived at through scientific and verifiable calculations by one of their witnesses – Dr Edgar Otumba. According to their calculations, the 50 percent threshold should be 7,176,582.766 votes with Ruto having declared the winner with 7,176,141 votes, thus creating a shortfall of 441.766 votes. 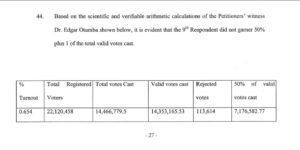 Further, in arguing that Dr Ruto never met the Constitutional threshold, Mr Odinga and his running mate Martha Karua allege that IEBC kept deleting and uploading different Forms 34A, 34B and 34C even after the declaration on August 15.

“Even based on the disparities in the fraudulently manipulated numbers of the voter turnout, the petitioners (Raila and Karua) state that the 9th respondent (Ruto) did not meet the Constitutional threshold of 50 per cent plus one of the valid votes cast,” the petition filed on Monday states.

Mr Odinga and Ms Karua also want the Supreme Court to give an order for the scrutiny of all rejected and spoilt votes. They say that a declaration should be made to have the rejected votes included while computing whether a candidate has achieved the 50 per cent plus one vote threshold.

In 2013, the Supreme Court ruled that only valid votes should be used during the computation of the threshold during the then petition against the election of President Uhuru Kenyatta and Ruto.

This piece was first published on NTV on video below: