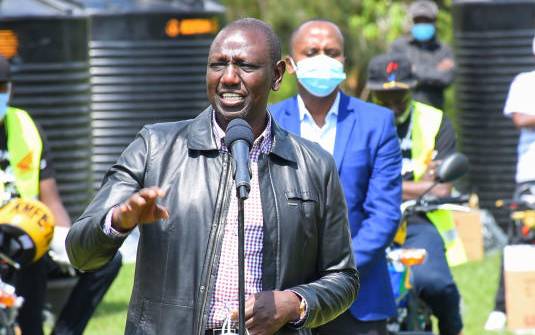 Deputy President William Ruto has opened up a new battlefront with President Uhuru Kenyatta in the tussle for the control of Jubilee Party.

At the new address, an elated DP hosted 20 Jubilee MPs, including those removed from parliamentary committees and leadership for supporting his presidential campaigns.

Outspoken Elgeyo-Marakwet Senator Kipchumba Murkomen, who was ousted from the Senate Majority leader, said they had opted to open new party offices to hold party meetings.

He claimed they had been denied access to Jubilee Party headquarters in Pangani on Thika road.

Murkomen confirmed that a meeting with the DP to console those targeted by Uhuru’s purge took place yesterday at the new office.

“We had a meeting with the DP at the Jubilee Asili Centre. It is a centre for all members, not parallel. It is the centre for Jubilee Party members who believe in the original idea of the party, including the implementation of the promises we gave to the people,” Murkomen told The Standard.

“Yes, it was to tell them that they have a responsibility to implement the Jubilee manifesto that brought the party to power in 2013 and 2017,” Talam told The Standard.

In a tweet yesterday, Ruto said: “Had lunch with Jubilee MPs who were recently assigned other responsibilities in the party. Thanked them for exemplary service to the party and the nation. I implored them to continue focusing on Jubilee’s people-centred transformational agenda now and in the future. Sote pamoja.”

The Tangatanga Jubilee faction assembled at the new offices a day after the President’s camp hosted Wiper’s Kalonzo Musyoka and former governor Isaac Ruto of Chama Cha Mashinani, whose parties signed a cooperation agreement at Jubilee Party headquarters. The ceremony was attended by Secretary-General Raphael Tuju and vice-chairman David Murathe.

Ruto’s meeting also came barely a day after National Assembly Speaker Justin Muturi formally announced the discharge of all those de-whipped by the party.

Yesterday, Murkomen, who was the first casualty of the purge, alongside Nakuru Senator Susan Kihika, who was ejected as Majority Whip in the Senate, said the Jubilee Asili Centre was funded by party members who felt that for the last three years a few officials had disenfranchised them by denying them chance to meet at the party headquarters.

Senator Murkomen, at the same time, said the situation had a negative effect on members’ contributions to the implementation of their manifesto and growth of the party.

“From the Jubilee Asili Centre, we will be advancing the original idea of Jubilee Party and its membership. We will periodically give updates to members and the country,” said Murkomen, an ally of the DP. During a recent meeting of Jubilee senators, which was snubbed by Ruto’s allies, Uhuru picked Kanu’s Samuel Poghisio to replace Murkomen while Murang’a Senator Irungu Kang’ata took over as Majority whip in the Senate.

Tharaka Nithi Senator Kithure Kindiki was also voted out of the Deputy Speaker’s office, while four senators were discharged from their committees as chairs or vice chairs.

For the last six months, the new office has reportedly been serving as an informal meeting point for those supporting Ruto’s presidential bid. Gatundu South MP Moses Kuria and Lang’ata’s Nixon Korir have been running operations from the building also nicknamed the Hustler Nation Centre.

Yesterday, Belgut MP Nelson Koech confirmed the centre is an alternative home for members punished for their links with Ruto.

“The DP held a meeting with de-whipped Jubilee MPs. Their crime is their association with the DP, who is also the deputy party leader. The action is quite telling. The DP met them for moral support and to tell them they have found a new home in the Jubilee Asili Centre,” said Koech.

“Very soon there will be accelerated activity at the centre,” he added, referring to the address publicised yesterday with a banner of the same Jubilee handshake symbol, but with yellow colours instead of the red official Jubilee ones. Kimilili MP Didmus Barasa said the office had been operational for six months.

Barasa said the new office offered a venue for MPs denied access to the Jubilee Party headquarters. Recently, Jubilee Party made changes in its structures, which saw Ruto allies being kicked out of key decision-making organs.

“Our agenda is different from what is happening at the Jubilee headquarters. The office has existed for about six months. This is a place where we can discuss our political activities,” said Barasa.

The Standard made an inquiry with the Office of the Registrar of Political Parties if the rival Jubilee wing had reserved the name “Jubilee Asili”.

Registrar Anne Nderitu said by yesterday her office had not received any intention for reservation of the name. “I am out of office already, and by the time I was leaving there was nothing like that,” said Nderitu.

Last evening Ruto allies went on a frenzy to share pictures of the new office. Up to 16 MPs allied to Ruto were de-whipped from various parliamentary committee leadership in the ongoing purge.

Others kicked out of the chairperson positions were Mandera South MP Ali Adan (Agriculture committee) and his Machakos Town counterpart Victor Munyaka (Sports, Culture and Tourism).

Speaker Justin Muturi made communication to the House about the changes during yesterday’s session while confirming that the process of their removal complied with the relevant Standing Orders.

“Having perused the documents through which the Jubilee Party transmitted the decision to discharge the said members, I am satisfied that the process leading to the discharge met the requirements set out in Standing Order 176,” said  Speaker Muturi.

“Accordingly, the discharge of the said members takes effect immediately,” he ruled.

According to Standing Order 179 (2), whenever a vacancy occurs in the office of chairperson or vice-chairperson of a select committee, the members elect new leadership within seven days.

Politics
DP’s allies say that since President Kenyatta’s purge, they have been denied access to Jubilee Party headquarters.

Why Some Summer Fruits Make Your Tongue Itch, Even If You’re Not Allergic

Your Fingernails Are Showing Your Age. Here’s What To Do About It.

The Difference Between Having Strong Feelings And Being Triggered