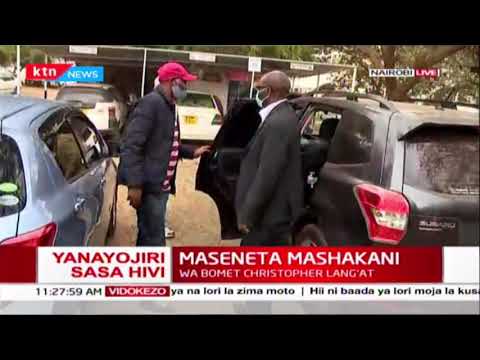 Bomet Senator Christopher Langat and his Samburu counterpart Steve Lelegwe were Monday arrested by officers from the Directorate of Criminal Investigations (DCI) after a dramatic wait at their homes.

Langat surrendered and was arrested at his Nyayo Estate home in Nairobi before being taken away with his lawyer and Law Society of Kenya President Nelson Havi.

Lelegwe, according to colleagues who spoke on the floor of the Senate on Monday, was arrested while on his way to the House and taken to Samburu for questioning.

Sources have told Standard Digital that Langat is currently being driven to Bomet. They first drove into Embakasi Police Station before they left. Other officers said he was to be grilled at Nairobi Area DCI.

Kakamega’s Cleophas Malala remained holed up in his house after police said they wanted to talk to him.
Police officers had for the better part of Sunday night and Monday morning camped outside the homes of Langat and Malala.

Police say they are investigating claims of incitement to violence by the leaders and hence they need to talk to the two leaders. It is not clear when the said crimes were committed and if it is true. Police said they “wanted some clarifications from them”.

Dr Langat’s home in Nyayo Estate Embakasi was the first to be affected on Sunday night at around 10pm, forcing fellow senators to come to his rescue. The officers however held their ground, and were still there Monday morning.

Langat held that he would not go anywhere.

“I was in church in the morning if you wanted you would have arrested me, where are you taking me at night?” he shouted from his window.

Other officers went to the home of Senator Malala in Kitengela at around 2am, also demanding to arrest him. Malala refused to leave the house. The officers were still outside the home Monday morning.

Both officers in uniforms and others in civilians were at the homes.

Elgeyo Marakwet Senator Kipchumba Murkomen said that the Senators were being targeted for their staunch opposition against the Commission for Revenue Allocation (CRA) revenue sharing formula.

Murkomen who had earlier revealed that five senators were targeted for arrest said that they would not allow Senate proceedings to continue in case one of the senators was arrested.

“The Senate will not proceed this morning unless they Produce Senator Malala (Kakamega) and Senator Langat (Bomet). This is no longer about money it’s about our lives!” he said.

The drama was brought before the Senate floor forcing Speaker Ken Lusaka to adjourn the session to 2.30 pm as the security committee seeks the whereabouts of the three colleagues.