Photographic evidence was submitted in court on Day Two of the Sharon Otieno murder trial.

She told the court that her role was to reconstruct the crime scene, guided by officers from Oyugis Police Station in Oyugis town.

She also submitted photographs of a shawl, a torn condom wrapper and a bottle top found at Kodera Forest, adding that she documented the post-mortem process.

The court heard that on September 18, 2018, Saka went to Oyugis Police Station from the DCI Headquarters to report a recovered motor vehicle that had allegedly been used in transporting Sharon Otieno’s body.

According to the witness, Sharon was murdered at Kodera forest, but upon questioning by the defence, she submitted that “there was no sign of blood in the motor vehicle.”

The witness said she was acting on orders from the Homicide Detectives Unit.

“On September 19, I documented the vehicle at Oyugis Police Station, directed by detectives of the homicide unit,” she testified. 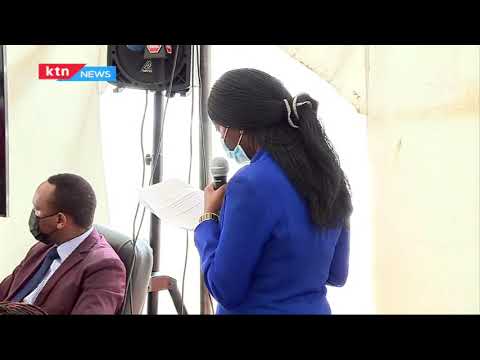 Saka also told the court that all photos and prints had been submitted under her supervision, dismissing any instances of evidence being interfered with.

Migori Governer Okoth Obado, who has since been charged with the murder of Sharon Otieno was also present in court. The Prosecution has lined up more than 30 witnesses.

On Monday, the first witness, Government Pathologist Johansen Oduor, told the court that Sharon’s unborn baby died from a sharp abdominal trauma caused by a stab wound inflicted in its mother’s left upper part of the uterus.

Oduor disclosed the cause of Sharon Otieno’s death was severe haemorrhage due to penetrating force trauma and also manual strangulation.

Otieno, a second-year student at Rongo University, was found murdered in Kodera Forest, Homa Bay County in September 2018. She was seven months pregnant at the time. Her body was found with stab wounds and preserved at the Oyugis Level Four Hospital.

Governor Obado, his personal assistant Michael Oyamo, and a clerk in Migori County, Caspal Obiero, were charged with her murder.