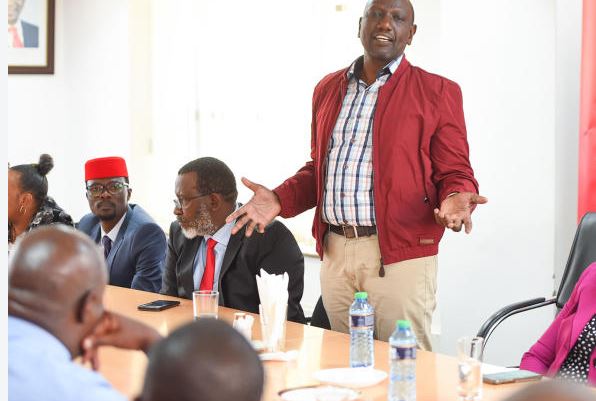 A showdown is looming today at Jubilee headquarters as rival factions of the party dare each other to “bring it on”.

Coming a day after chaotic scenes in Murang’a County, where two people were killed, the clash, if it happens, would underscore the crisis of leadership at the party.

A defiant Ruto’s groups shot back, declaring themselves the rightful owners of the party and vowing to show up at Jubilee House’s Pangani offices in Nairobi today.

“Let them try to come without prior notice. We will deploy the red beret, fanya fujo uone. The General Service Unit will be at the premises to ensure there is order,” party vice-chairman David Murathe told The Standard yesterday.

He said nobody had denied the faction access to party offices, but protocol must be observed and the purpose declared in advance.

“We don’t want to turn our headquarters into a campaign centre by the DP and his team, and this will give him undue advantage against his potential competitors,” he said.

He claimed the DP’s brigade were not adhering to the Ministry of Health protocols on Covid-19 pandemic, and that during Ruto’s last visit, the party was forced to fumigate the entire building because they ignored the protocols.

“Jubilee is a political party, not a religious cult. The thinking that its leader is supreme is not only superfluous but hollow to the core. Members of the party are at liberty to direct the party to the course they deem fit. Watch out for the next few days,” Mr Cheruiyot said.

Mr Nyoro said they would go to the JP House today and dismissed the resolution of the National Management Committee (NMC) to kick out the DP from his party post.

Mr Kositany, who is also the party’s deputy secretary-general, said in the coming days there would be heightened activity at the headquarters.

“If they have issues with the resolution of the NMC to strip the DP of the deputy party position, let him raise the concern with me and party chairman Nelson Dzuya,” he said.

On Wednesday last week, a day after the President left the country for France, the DP hosted more than 30 MPs at JP headquarters the whole day. This was his third impromptu visit to the premises.