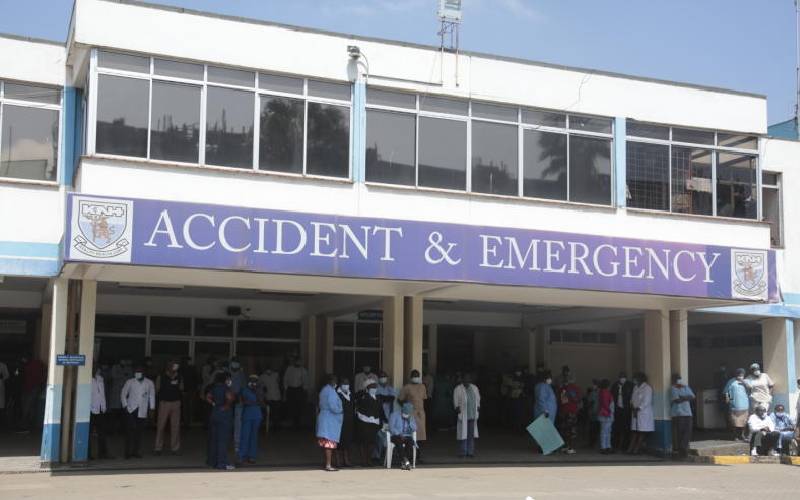 I saw a man die last Monday. I heard his groans of pain and laboured breaths, I saw traces of tears on the corners of his eyes before he succumbed. He was a victim of a motorcycle accident who had been taken to Kenyatta National Hospital (KNH) by his friend.

The timing was wrong. They arrived just as the medics were polishing their whistles to go out and protest about pay. The irony of a man breathing his last, abandoned and alone, at a hospital corridor as medics danced outside was not lost.

If you think watching such death is painful, then you have not seen the hanging tears of a desperate friend begging for help and stopping anyone in a white dust coat to ask if they are doctors. The young man ran up and about the vast hospital seeking help for his dying friend and when it all got overwhelming, he sat on a bench and broke down. People around him, including the workers at the hospital, took out their phones and started recording.

The next day, as the strike intensified, I saw a woman roll on the ground wailing for people to save her husband who was unconscious in a taxi at the hospital’s parking lot. Almost instinctively, phones were removed to take photos and videos at the time when dignity was slipping away from her. As desperation took the better of her, she flipped open her empty wallet to show that she had no money to move her husband to another facility, more phones were thrust towards her face.

I expected people who had taken the images to use them to agitate for change. I thought the many hands that had stretched to record these heart-shattering incidents would scream online and off the net about what happens when the healthcare system crumbles.

I was hoping that since so many people had recorded these moments of vulnerability, it would start conversations about universal health coverage and why the mediocrity in public health systems must stop – perhaps some anger at how when money is swindled, the result is death without dignity and people losing hope in humanity.

Those videos and photos would have become an immortalised reality of the injustice that the poor are subjected to when they are seeking healthcare. In between the conversations about people pocketing money meant for development of health infrastructure, there is anguish and death. It would have been beautiful for the videos to be used to reinforce that message.

I saw none of that; just random mentions on Twitter and Facebook about a “woman losing her mind at KNH”.

These two incidents got me wondering. What has happened to humanity – that distant pity we feel when someone next to us is sinking? What do people do with the many videos they capture of others at their lowest moments?

I thought about those images and how they sit in phone galleries, probably being used for banter in bars and family social media platforms. Videos and images taken by ordinary citizens have shaken the world. Details of the death of George Floyd, a Black man who died in the hands of white police officers would have remained hidden if it was not for someone with a phone who captured it all. The video sent chills across the world and started the often avoided topic on racism.

Social media campaigns that saved lives have been initiated by individuals who froze moments using their phones. Snippets of phone videos about the Iranian protests in the 2009 elections sparked the Persian awakening that pushed for democracy. Closer home, many injustices, including cases of police brutality have been exposed using images and videos from cheap phones. The overriding feature that always shows in such recordings is the intention.

Sadly, the chase for social media clout has ruined us. The need to show that we were there when things happened has eroded the dignity we once accorded those who were too vulnerable to defend themselves. The internet is already full of grisly images of accidents, inappropriate videos of children captured by adults and posted for likes; there is absolutely no need for more photos of children posing awkwardly with donations of pads and oversize underwear that ‘well-wishers’ have donated.

It is time to do better. Time to acknowledge the power of the devices we hold and how we can use them to bring change – even if it means tagging policymakers on social media posts and agitating for change. While at it, let the images and videos uphold human decency and dignity.

-Ms Orengo is a reporter, The Standard