Speaker says question on whether sections of the Bill are unconstitutional is premature.

He said any amendment shall negate the popular will of the people in directly amending the Constitution.

Muturi said alterations to the text of such a bill may only be allowed to correct errors of form or typographical errors before submission for assent.

The Speaker, in a ruling which followed a litany of questions by MPs, said the question on whether some sections of the Bill are unconstitutional, is premature.

The speaker further ruled that the bill promoted by the Building Bridges Initiative is properly before the House.

He further held that no one can stand in the way of the people’s desire to amend the Constitution as ascribed in Article 1 of the supreme law.

“No state organ or person to whom power is delegated by the people under Article 1 of the Constitution, can stand in the way of the exercise of the people’s sovereign power to chart the course of their future in any manner they deem fit within the provisions of the Constitution,” Muturi ruled.

He directed that the threshold for voting on the bill during the second and third reading would be a minimum of 176 members.

Voting on the bill shall be by roll-call, with arrangements being made for members to vote virtually following the prevailing Covid-19 situation.

On the many court cases challenging the BBI, Muturi held that there was no court order directed at Parliament with regard to consideration of the bill.

The speaker further said he was satisfied that adequate public participation was undertaken in respect of the bill – being a popular initiative.

He said the BBI bill seeks to change sections of the Constitution which need a referendum to implement. 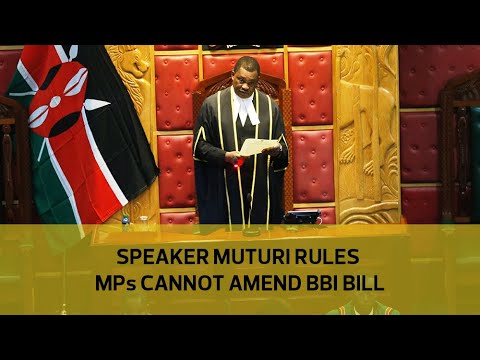