In recent years the pilgrimage route from St. Jean Pied de Port, in France to Santiago de Compostela, in the North West of Spain, also known as The French Way or Camino Francés, has become increasingly popular. Ironically most people are tackling the Camino de Santiago, not for religious reasons but rather to test themselves or just simply to get away from it all. And the good news is that you get a certificate showing you have completed the walk at the end.

The “Way of St James”

In English, it is known as The Way of St James, as the bones of the disciple are supposedly buried in the cathedral of Santiago, but to the hikers, it’s just the Camino. In fact, there’s not just one route, but many coming from all over Europe, and the most popular is The French Way. It climbs the Pyrenees, winds its way across Navarre, Rioja, Castile and Leon, before entering Galicia and arriving in Santiago. With a fair wind behind you, it takes just over a month.

I want to get a taste of the route, without doing the whole trek. In fact, many people don’t have the time to do the whole lot, so return year after year to do their missing sections. Accommodation varies from dormitory beds in Albergues, often costing a few Euros, to luxury rooms in Paradors, with a great deal of choice in between. There’s always food along the way with most places offering a three-course pilgrim menu for around ten euros.

Learn everything you need to know about the Apostle St. James the Greater here.

The path climbs steeply as it traverses the Pyrenees and this is one of the hardest sections of the walk. It reaches 1050m before dropping into Spain and reaching Roncesvalles, where there’s a huge abbey church and the first overnight stop. Even though it’s April, there are already a lot of people on the trail, all plodding purposely forward and, compared to me, completely overloaded.

In the next few days, there are some beautiful sections, particularly as I walk down from Roncesvalles, through beech and oak woods, passing through immaculate Basque villages, houses all in white with red or green shutters. But there are a number of large cities, like Pamplona, Logroño, Burgos and Leon where the tramp through sprawling suburbs on the side of busy highways is slightly gruelling.

However, the rewards come in the shape of magnificent cathedrals, ruined castles and medieval streets, not to say excellent food and drink. 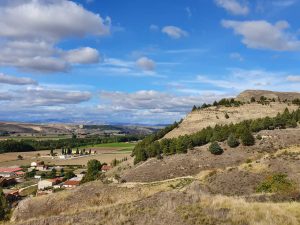 Trials of the Meseta

After leaving Burgos there are the trials of the Meseta, a barren tableland at 800m, with no shade and howling winds. There’s little respite until the city of Leon where the landscape begins to change and snow-capped mountains loom on the horizon.

You begin to climb and finally reach the highest point on the Camino, marked by an iron cross. You’re supposed to leave a stone you’ve carried from home at its foot which, in theory, will absolve you of some of your sins.

At Sarria, in Galicia, I’m just 100 km from Santiago and it gets even busier. For those who want a certificate, they can start here, walk the last five days and still qualify. It’s a calming section of the walk, through green rolling hills and broad meadows, the wooded pathways providing plenty of shade.

I begin to sense muted elation among the pilgrims since they’re near to reaching their final destination. Some of them look like war veterans, with couples supporting each other as they limp ever further forwards.

On my last day, I arrive in Santiago just in time for the midday pilgrims’ mass in the Cathedral. At the end of the service, eight red-robed men swing the famous Botafumeiro, an incense burner weighing 80 kg.

It flies through the air dispensing holy smoke to the multitude. For those medieval pilgrims, it must have been heartening to know you’d halved your time in purgatory by going the distance. For me, though, I’m just glad that I don’t have to walk any further.

Disclaimer: this article was sponsored by One Foot Abroad