Skip to content
Travel
(CNN) — Alaska’s Anchorage International Airport lacks the waterfalls and razzmatazz of Singapore Changi or the eight runways of Chicago O’Hare.
But this unassuming little airport — equidistant between New York and Tokyo — has lately had an unexpected rise in prominence.
It’s now the busiest airport in the world… on some Saturdays, at least.
“Saturday’s a busy day for cargo operations, which is our bread and butter, but it’s also the slowest day for passenger service,” explains airport manager Jim Szczesniak over video call.
“So for example, on Saturday, May 2, we in Anchorage had 744 flight operations, whereas Chicago had only 579 and Atlanta had only 529.”
Anchorage also briefly snatched the world’s busiest title on Saturday, April 25.

Top of the world

Airports Council International’s annual report on the world’s busiest airports, released earlier this week, makes for sobering reading.
The coronavirus pandemic means that passenger traffic is currently down by more than 90%, according to Angela Gittens, ACI World’s director general. “The demand is pretty much gone.”
One area that has been on the rise, however, is cargo traffic, which is why Anchorage Airport — in ordinary times, the world’s fifth-busiest cargo airport — is on the ascendant.
“We’re seeing an increased demand for cargo capacity,” says Szczesniak. “And that’s primarily because a lot of the supplies for the fight against Covid in North America are produced in Asia.”
Anchorage is positioned to perfect geographical advantage, at what the airport says is 9.5 hours’ flying time from 90% of the industrialized world.
Its location, quite literally at the top of the world, means that planes “fly up and over the top [of the globe] to shorten the distance,” says Szczesniak.
“The advantage of Anchorage is airplanes can fly filled with cargo but only half-filled with fuel. They fly into Anchorage and then they re-fuel and then onto their destination.”

The little airport that could
Anchorage sits at the base of the Chugagh Mountains and serves a city of just 300,000 people. But it’s stepped up to play a key role in the international transport of critical medical goods during this global crisis.
It calls to mind the story of Gander Airport in Newfoundland, which welcomed 7,000 displaced airline passengers on 9/11, inspiring the Broadway musical “Come From Away.”
“
We’re using different areas of the airport to accommodate parking that we normally wouldn’t,” says Szczesniak.
The airport has recently played host to the heaviest aircraft ever built, the Antonov An-225 Mriya cargo plane, and also some titans of sport — the New England Patriots’ plane stopped here because it was flying supplies between Boston and Asia.
In order to prevent the spread of Covid-19, the aircraft crew passing through Anchorage “minimize their ability to interact with Alaskans,” explains Szczesniak. They use private transport to and from hotels and avoid mixing with ground crew. 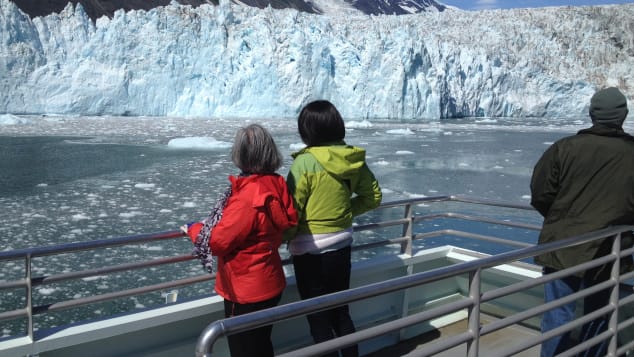 “Post-coronavirus, we think Alaska is going to become quite a popular tourism destination,” says Szczesniak. “You know, they tell you to stay six feet away from people. In Alaska you can come here and have a fantastic vacation and not be within six miles of somebody.”
There are around 60 glaciers within a 50-mile radius of the airport and this most gorgeously wild of US states is covered with mighty national parks and preserves. There’s hiking, there’s fishing, there’s white-water rafting and more; it’s ideal for backwoods adventurers.
The airport is preparing for the return of passenger service by upgrading its cleaning program to Covid-19 battle-ready standards, using all hospital-grade disinfectants.
In the terminal, they’ve added sanitizing UV LED lights to the escalator handrails. Says Szczesniak, “As the handrail travels through the machinery, it’ll be blasted with UV light to kill any microbes, viruses or bacteria that happen to them.”

At the time of our video call between London and Anchorage, there were 90 planes in the air heading from the UK capital to the Alaskan airport, according to real-time flight-tracking site Flightradar24.
“There are more airplanes in the sky right now to and from Anchorage than there are for both JFK and LaGuardia,” says Szczesniak.
The world’s busiest airport, Hartsfield-Jackson Atlanta International Airport, saw 110.5 million passengers in 2019. But in the first quarter of 2020, the Atlanta airport logged 20.7 million passengers, down more than 18% from the same period last year.
The aviation industry is facing a $97 billion reduction in revenue in 2020 and recovery is likely to be a slow and painful process.
The team at Anchorage are proud of their efforts in facilitating the transport of medical supplies during this time of global need — but they hope that their time as occasional record-holders will be mercifully short.
CNN’s Marnie Hunter contributed to this report