President Uhuru Kenyatta has yet again called for a review of the Constitution, saying that the moment was calling on Kenyans “to do better” and “re-arrange” the country.

His remarks – on the eve of the 10th anniversary of the promulgation of the 2010 Constitution – signals a looming referendum on the proposed amendments.

The President said that the drafters of the Constitution crafted it to minimise confrontation and civil conflict whilst admitting it was a work in progress.

He said that the grand law was adopted on the backdrop that it will be made better in the future.

“We must not succumb to the paralysis of constitutional rigidity. We must treat a constitution as a living document that must constantly adjust to our emerging realities,” Uhuru said in a televised address from State House, Nairobi.

He explained that Kenyans should make adjustments to the law to ensure it was not a cease-fire document that enforces a zero-sum game in which the winner takes it all in elections.

“I want to emphasise that we must not go for the populist path. Let us choose the bold path; that path that will assure Kenyans of sustained peace and security, and shared economic prosperity,” he said.

Uhuru, who had set the stage for the full reopening of the economy, said if the Covid-19 pandemic was seen an opportunity, then Kenyans “will completely re-arrange the country, its constitutional architecture and its heritage.”

“We can invent the future we want through our actions of ‘civic responsibility’ today,” he noted, quoting one-time American president Abraham Lincoln who said the only way to predict the future was to invent it.

Calls to review the law and possibly expand the executive have been rife since the March 2018 ‘handshake’ between President Uhuru Kenyatta and Opposition chief Raila Odinga.

The rapprochement gave birth to the Building Bridges Initiative, which under a nine-point agenda, promised a document that would foster unity and help to end negative ethnicity, political antagonism, corruption and other social woes that bedevil Kenya.

In July 2020, the Building Bridges Initiative (BBI) Steering Committee said it had concluded its work and was waiting to present the report to President Uhuru Kenyatta.

The release of the document has been delayed by two monthly partly due to the coronavirus pandemic. Raila Odinga has, however, in recent weeks said the launch will happen soon. 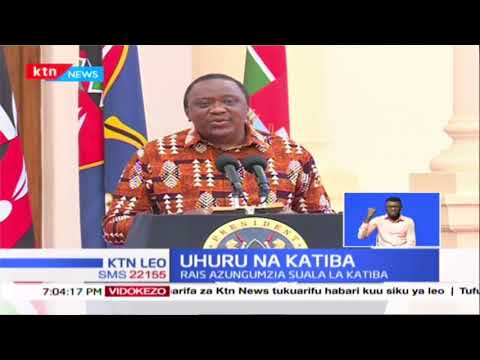