1982: Charged with treason and detained for 6 years

1988: Arrested for involvement in multiparty campaigns

1991: Upon his release, he fled to Norway over assassination fears

1992: Back from exile, Joined Forum for the Restoration of Democracy (FORD)

1997: Contested for the presidency and lost

-Led merger between NDP and KANU

2002: Forms LDP, teams up with National Alliance Party of Kenya (NAK) to form NARC that defeated Uhuru Kenyatta in 2002 poll.

2005: Raila led the ‘Orange’ camp in opposing the proposed constitution

2007: Vied for the presidency for the second time under ODM and was runners up

2013: Contested for the presidency for the third time on a CORD ticket, lost to Uhuru Kenyatta

2017: Vied for the presidency for the fourth time on a NASA ticket and lost to Uhuru Kenyatta

2018: Raila-Uhuru decided to reconcile and shook hands before millions of Kenyans

2022: Vied for the presidency for the fifth time on Azimio la Umoja – One Kenya Alliance ticket 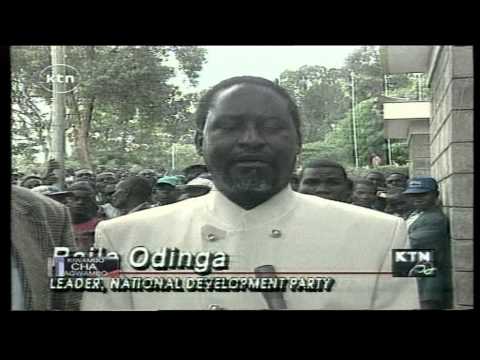