This Sunday, Tom Brady joins LeBron James as the only two athletes in NBA, NFL, NHL and MLB history to make 10 championship appearances since 1990. Brady and James are no strangers to debates over their careers, but it’s not often that their amazing championship runs are placed side-by-side.

Let’s dive into how they compare:

WHAT THEY SAY ABOUT EACH OTHER

It’s been a mutual admiration society between the two GOATs over the years. James noted in January that he was inspired watching Brady play and seeing what he did with the Buccaneers, and has shown appreciation for Brady over the years on social media. Brady, for his part, has heaped praise on James and has jokingly compared himself to the NBA great, saying “we’re similar athletes, LeBron and I, both great size and speed, jumping ability, shooting … not quite, nah he’s a much better athlete than me.”

Only 24 athletes in the history of the four major American sports — including such luminaries as Bill Russell and Babe Ruth — have ever made as many title games as Brady and James. Before they accomplished this feat, the last player to do it was Kareem Abdul-Jabbar back in 1989. Brady is the first to do it in the NFL (two other NFL players, Mike Lodish and Brady’s teammate Stephen Gostkowski, have made it six times). Both Brady and James have played in a final across three different decades.

Both players had iconic performances in losing efforts: In Super Bowl LII, Brady became the first player in NFL playoff history to put up 500 pass yards in a game, finishing with 505. The Patriots lost to the Eagles 41-33. In Game 1 of the 2018 NBA finals, LeBron put up a career high 51 points (20th all time in NBA postseason history) in a losing effort against the Warriors.

Both players also lead their respective sports in clutch performance measures: Brady has 14 career fourth-quarter or overtime-winning drives in the playoffs, including in six different Super Bowls. The only other NFL player to come close in the postseason is John Elway, with six. Meanwhile, James has five career postseason buzzer-beaters, the most in NBA history (Michael Jordan is second with three). Other clutch late- game performances from James include scoring 37 points in Game 7 against the Spurs in 2013 and a Game 7 triple-double in 2016, including the iconic chase-down block on Andre Iguodala that has become one of the poster shots of James’ career. 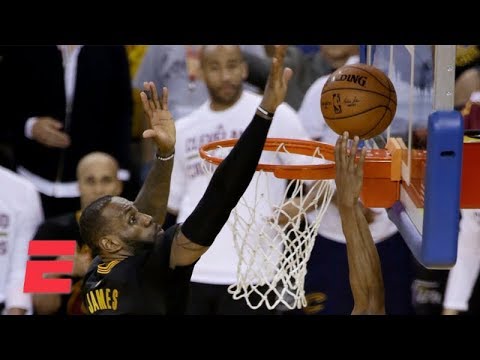 Perhaps their most incredible comebacks occurred only eight months apart. In June 2016, LeBron James and the Cleveland Cavaliers became the first team in NBA history to erase a 3-1 series deficit in the NBA finals, doing so against a 73-win Golden State Warriors team. February 2017 saw Tom Brady lead the Patriots, who were down 28-3 midway through the third quarter, to the biggest comeback in Super Bowl history, winning 34-28 in overtime.

Longevity is also a similarity in the two stars’ careers. Brady is the only player to win the Super Bowl at 40 years old. James is the second-oldest player to win NBA finals MVP at 35.

Brady and James may have ended up with similar championship resumes, but that wasn’t an obvious conclusion from how they started out.

James was a generational prodigy-level prospect out of Akron, Ohio, making the cover of Sports Illustrated in 2002 while he was in high school with the caption “The Chosen One.” Brady, meanwhile, was selected 199th overall in 2000, and began his career with the Patriots fourth on the depth chart behind Drew Bledsoe, John Friesz and Michael Bishop but quickly rose through the ranks, earning the backup position by the end of his rookie year.

This is where the quality of competition and teams they led comes into play. Looking at the path to the championships, Brady’s journey to 10 Super Bowls included wins over Ray Lewis and the Ravens, Phillip Rivers and the Chargers, the Colts with Peyton Manning, Big Ben and the Steelers and much more.

James’ teams, particularly in the Eastern Conference, had an arguably much easier time securing a spot in the finals. Early on, teams like the Celtics and Pistons gave James and the Cavs trouble, but James and his teams ended up going on an incredible 24 straight series victory run against Eastern Conference teams en route to eight straight finals appearances.

In the finals, however, LeBron James’ teams were underdogs in 7 of 10 appearances, often facing the Warriors and Spurs, two of the best dynasties of the past 20 years. Tom Brady, meanwhile, finds himself and his teams as underdogs going into Super Bowl LV for only the second time in his career, and the first time since his Super Bowl debut in 2001.

Then, there are the teams they play for. Brady, up until this point, has won all of his Super Bowls with the New England Patriots, in tandem with coach Bill Belichick. James has won rings with three different teams, including one with his hometown Cavaliers, bringing the city of Cleveland its first major pro sports championship win since the 1964 Browns. James did this under five different head coaches, the only player to achieve that feat.

SO WHICH ONE IS BETTER?

This debate may rage on for years with no conclusion. You can throw all the stats out there: James has 16 All-Star appearances, is a four- time NBA Finals MVP and a four-time league MVP while Brady has 14 Pro Bowl appearances, four Super Bowl MVPs, and three league MVPs. Brady has six rings in nine appearances (and could make it seven of 10 on Sunday), James has four in 10. Tom Brady reached eight straight conference championship games. LeBron James played in eight straight NBA Finals.

You could even argue that Brady had it tougher with there being more players on the field in an NFL game, therefore it would be much more difficult for one play to influence the state of the game and that winning is less an individual effort and more a team effort. However, you have to win 16 games in an NBA postseason to grab the chip as opposed to three in the NFL (four if you land in the wild card, which Brady and the Patriots often skipped by earning a bye), making it a longer grind for James.

Regardless of your opinion, it could all change as soon as this weekend. It’s that thin of a margin.