“It is notified for the general information of the public that in exercise of the powers conferred by section 2 (2), as read with section 3 of the public holidays act, the cabinet secretary for interior and coordination of national government declares that Tuesday, 20th July, 2021 shall be a public holiday to mark Idd-Ul-Adha, 2021,” reads the gazette notice.

Idd-ul-Adha is an Islamic festival that marks the end of Hajj, the annual Islamic pilgrimage to Mecca.

Previously the festival was marked with prayers then family gatherings that involved sharing of food. But this time the case may be different due to the ban on public gatherings and other Ministry of Health containment measures to curb the spread of Covid-19. 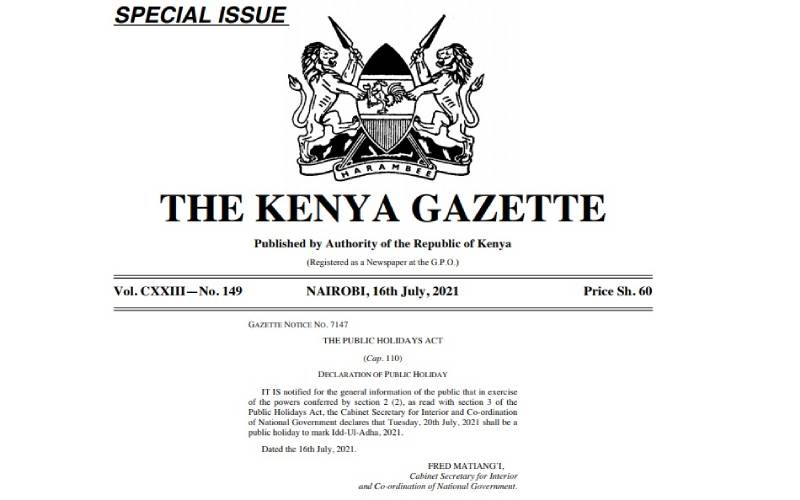 Also known as Eid al-Adha (Sacrifice Feast), the feast is celebrated to honour the willingness of Abraham to sacrifice his son Isaac as an act of obedience to God’s command.

During the feast, Muslims re-enact Ibrahim’s obedience by sacrificing a cow or ram.

The family will then eat about a third of the meal a third goes to friends and relatives, and the remaining third is donated to the poor and needy.

It often falls on the 10th day of Dhu al-Hijjah, the twelfth and final month in the Islamic calendar.

As the exact day is based on lunar sightings, the date may vary between countries.