For the first time, Twitter called tweets from Donald Trump “potentially misleading” — a decision that prompted the president to accuse the social media platform of election meddling.

On Tuesday, Twitter highlighted two of Trump’s tweets that falsely claimed mail-in ballots would lead to widespread voter fraud, appending a message the company has introduced to combat misinformation and disputed or unverified claims.
“Get the facts about mail-in ballots,” read the message beneath each tweet. It linked to a curated fact-check page the platform had created filled with further links and summaries of news articles debunking the assertion.
Twitter said the move was aimed at providing “context” around Trump’s remarks. But Twitter’s unprecedented decision is likely to raise further questions about its willingness to consistently apply the label to other Trump tweets that have been deemed misleading by third parties, particularly as the president has lobbed baseless allegations against former Rep. Joe Scarborough regarding the death of a congressional staffer years ago.
Trump’s allegations draw on a discredited conspiracy theory claiming, without evidence, that Scarborough played a role in the 2001 death of then-staffer Lori Klausutis. The reckless claims are undermined by the official autopsy, which found Klausutis had an undiagnosed heart condition. That history was painfully recounted in a letter written last week by Klausutis’s husband, Timothy, to Twitter CEO Jack Dorsey. In the letter, which became public on Tuesday, Timothy Klausutis pleaded with Dorsey to remove Trump’s tweets.
“I’m asking you to intervene in this instance because the President of the United States has taken something that does not belong to him — the memory of my dead wife — and perverted it for perceived political gain,” Klausutis wrote.
When asked by CNN’s Dana Bash on Tuesday about whether social media companies should take action against Trump for pushing conspiracy theories that a critic committed murder, Democratic presidential candidate Joe Biden said: “I’m of the view that social media companies have to reexamine whether or not — for example, if you put something out saying that — that same outlandish thing that the president thinks … they should say it’s not true.” 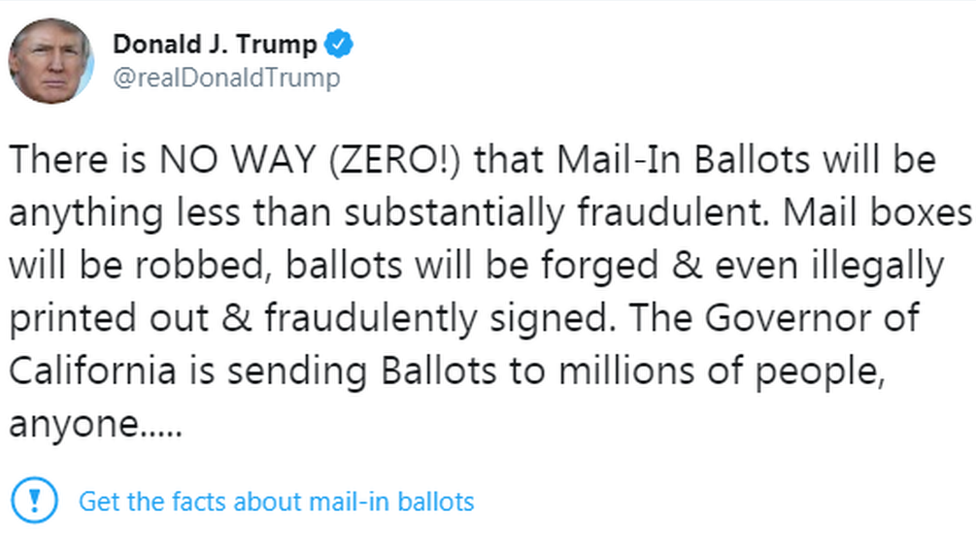 Shortly after the labels were applied, Trump took to Twitter to claim the company “is interfering in the 2020 Presidential Election” and “stifling FREE SPEECH.” He added that he “will not allow it to happen!”
Twitter declined to comment on Trump’s claims.
Twitter said Tuesday that Trump’s tweets about mail-in voting did not violate the company’s rules because they don’t explicitly discourage people from voting. But, the company said, the label offers context surrounding Trump’s claims.
“These Tweets (here and here) contain potentially misleading information about voting processes and have been labeled to provide additional context around mail-in ballots,” Twitter spokesperson Katie Rosborough told CNN Business in an email. “This decision is in line with the approach we shared earlier this month.”
Rosborough confirmed that this marks the first instances in which Twitter has labeled any Trump tweet as potentially misleading.
Twitter’s actions quickly led to criticism from some of its users, however, who said the measures did not go far enough. Some faulted Twitter for not explicitly saying in the label that Trump’s tweets contained false information; other users said the company should have used a larger font size.
The instant feedback highlights how Twitter, which has long grappled with how to address Trump’s tweets, may now find itself under even greater pressure than before to act in a consistent and transparent manner.
The White House did not immediately respond to a request for comment.
Twitter did not immediately respond to questions about who assembled the fact-checking page or whether it was algorithmically generated.

What are mail-in ballots?They are voting bulletins that are distributed and returned by post.

In a recent opinion survey conducted by the Pew Research Center, 66% of Americans said they would not be comfortable going to a polling place to cast their ballot during the current coronavirus outbreak.

Such concerns have increased pressure on states to expand the availability of mail-in ballots for all voters in order to minimise the risk of viral exposure from in-person voting.

While every state provides some form of remote voting, the requirements to qualify vary greatly.

Five states in the western US, including Washington, Oregon and Colorado, conduct their elections entirely via mail-in ballot.

Others, like California, provide a postal ballot to anyone who requests it.

On the other end of the spectrum, 17 states require voters to provide a valid reason why they are unable to vote in-person in order to qualify for an absentee ballot.