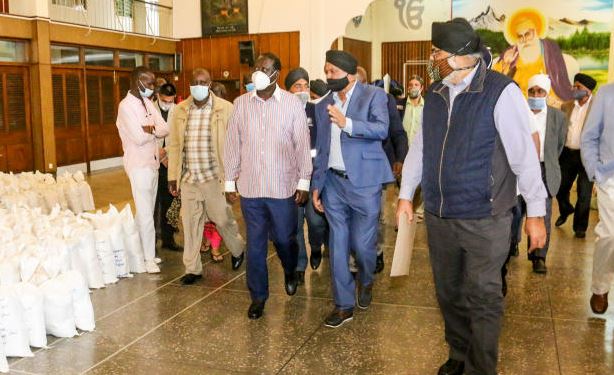 Plans are underway by President Uhuru Kenyatta and ODM leader Raila Odinga (pictured centre) to form a 2022 coalition, Saturday Standard has learnt.
The end game, according to trusted allies of the two leaders, is to field a joint presidential candidate for their parties in the 2022 elections.
Fresh details indicate the grand plan will take full shape when ODM signs a co-operation agreement with Jubilee in the next few weeks.

The president’s party last week signed a co-operation agreement with Kalonzo Musyoka’s Wiper and Chama Cha Mashinani of former Bomet Governor Isaac Ruto.
The three parties have opted for co-operation agreements because as members of another coalition — the National Super Alliance (NASA) — they will lose their status as minority parties in Parliament if they enter a formal post-poll coalition with Jubilee as Kanu did.
Willing players
Uhuru and Raila allies have confirmed that soon after ODM and Jubilee sign the co-operation agreement, they will invite “like-minded parties” and craft a coalition, which will lead to the signing of a pre-election agreement for the next general election.
Yesterday, ODM Chairman John Mbadi said the Orange party was keen on a pre-election deal with Jubilee.

“It is no secret that there will be a new outfit. It will be an alliance of Jubilee, ODM and other willing political players,” he said.
“Parties are formed to win power and govern. They are not charitable organisations. Towards the 2022 elections, political visibility and strength will be achieved only if we strategise properly.”
Insiders say Siaya Senator James Orengo is leading the legal team drafting the coalition papers. Orengo, who is also the Senate Minority Leader, has in the past indicated that a Uhuru-Raila alliance was in the works.
“There is possibility that the two top leaders will form a political alliance ahead of 2022 because they are working together to stabilise the country,” Orengo said last month in Taita Taveta.
“President Uhuru Kenyatta and Raila will continue working together for the stability of the country whether some people like it or not. The two top leaders will ensure the country gets accountable leadership,” he added.

The paperwork
The two parties are concluding the paperwork for the co-operation deal.
“The draft paperwork on a co-operation agreement is at its tail-end,” said an ODM MP who asked not to be named.
Mbadi said the party’s immediate focus is the co-operation pact with Jubilee. He, however, insisted that the deal would not involve government appointments, but support in Parliament and other areas of national importance.
“We must practice what we preach. Ours is long haul and not for short-term gains. But people should not be shocked if ODM insiders get government appointments,” said Mbadi.

Tuju said Wiper and CCM parties are still active members of NASA, as is ODM, Amani National Congress (ANC) of Musalia Mudavadi and Bungoma Senator Moses Wetang’ula’s Ford Kenya.
Jubilee National Advisory Council Secretary Hassan Osman said the co-operation Jubilee entered into with CCM and Wiper was a sign of further engagements toward 2022.
He claimed a majority of the officials of the 13 parties that merged to form Jubilee in the run-up to 2017 had given Uhuru the go-ahead to consult for purposes of alliances in the next polls.
Engage widely
“It is in the constitution of Jubilee that the party leader shall promote political engagements and co-operation with others. As parties that merged to form Jubilee, we have given him the go-ahead to engage widely to ensure the unity of the country,” said Osman.
Article 9 of the Jubilee constitution states that the party leader has ultimate powers over the running of the outfit and “shall promote political consultation, engagement and co-operation with other political parties and coalitions”, it reads in part.
Kanu Secretary General Nick Salat said the party would continue engaging Jubilee within the framework of their current engagement.
Salat said it was too early to tell how Kanu would engage other players in the run-up to 2022, saying Kanu could field its presidential candidate.
“We are comfortable with the current arrangement with Jubilee. Politics is dynamic, therefore we will make a decision when we get there,” he said.
Wiper MP Bernard Momanyi (Borabu) said Kalonzo’s plan is to work with Uhuru in the 2022 contest.
“Our party leader confirmed that we will engage our delegates to seek consent for the way forward. If we get the greenlight, we will sign the pact. Our strategy is to work closely with Uhuru for 2022,” he said.
Kalonzo had on Wednesday indicated plans to ditch NASA for a coalition with Jubilee.
“Our intention is to conclude a coalition agreement with Jubilee. If it were not for this Covid-19 pandemic challenge, we would have our delegates okay the decision,” said Kalonzo
“All these matters will be discussed in a brotherly manner. We are not an adversarial partner,” he added.
ANC deputy party leader and Lugari MP Ayub Savula indicated the party’s readiness to work with Jubilee, saying they expect new formations in the run-up to the next poll.
Savula, however, said the party’s current focus is on the fight against graft and realisation of the Big Four Agenda.
“ANC is working with Uhuru on matters of public interest like the fight against corruption, unity of the people and on development agenda,” said Savula.
“Definitely we will form pre-election coalitions ahead of 2022. We want to persuade Mudavadi to move close to Uhuru so that he can get support.”
Ruto, the former Bomet governor, however, said there is no urgency in focusing on 2022. He described the current engagement as a working partnership.
Meanwhile, the Economic Freedom Party (EFP) yesterday said it plans to enter a pact with Jubilee.
Chairman Hassan Abey said party officials are deliberating on their next political move in preparation for 2022.
EFP and Kanu were among parties that backed Uhuru’s re-election in 2017 but did not deposit their pre-election agreement with the Office of the Registrar of Political Parties.
“We have high-level discussions ongoing about a possible pact with Jubilee. In the past, we have supported President Uhuru and we want to continue with that engagement,” said Abey.

Michelle Ntalami: I am androsexual, I like men, masculine energy