Politics
House Clerk Michael Sialai said that the document was false and did not originate from the Parliament. 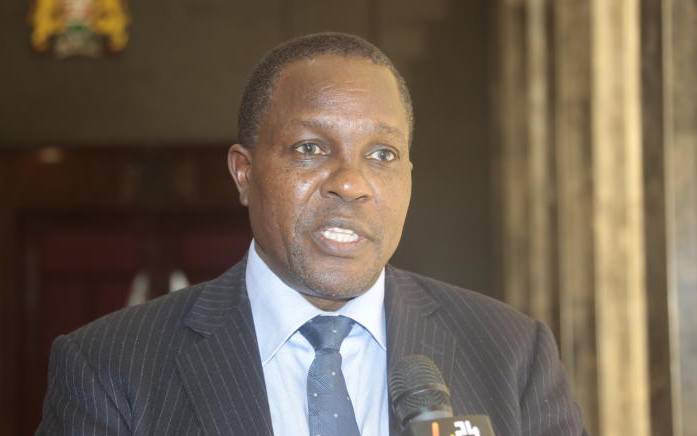 The Clerk of the National Assembly has disowned a viral document said to be an impeachment motion against Deputy President William Ruto set to be tabled in the House on June 2, 2020, when the legislators are back from recess.
In a statement seen by Standard Digital, Michael Sialai (pictured) said that the document was false and did not originate from the Parliament.

He noted: “The attention of the Clerk of the National Assembly has been drawn to a fictitious document circulating on social media purporting to be an Order Paper for the Assembly for the business to be transacted on Tuesday, June 2, 2020.”

“I wish to inform the members of the public that the document is fake and therefore has not been published by the National Assembly of the Republic of Kenya.”

According to the clerk, his office is charged with publishing the Order Paper detailing business to be transacted in the House after approval of the House Business Committee. This he said is yet to happen.

“The Committee is yet to meet to consider and approve the business to be transacted by the House when it resumes during the week commencing on June 2, 2020,” he said.

“Once that is done, the Order Paper will be published on the parliamentary website and circulated to all Members in the usual manner including notification through the official Bulk SMS platform.”

The Clerk was categorical in the Monday statement that no notice of special motion had been tabled before him as alleged in the circulated document. He also clarified that no Members of Parliament had forwarded their signatures endorsing the purported ouster motion against the DP.

He said: “Indeed, as Members of Parliament and the public will also deduce, the purported document contains several glaring features that indicate that it is not a parliamentary document.”

The motion which has been disowned by the Clerk lists DP Ruto’s impeachment as the main house business after the recess. It claims that the motion has been drafted by Kieni MP Kanini Kega.

It partly reads: “That pursuant to provisions of Article 150 (1) (b) of the Constitution and Standing Orders 61 and 65 of the National Assembly Standing Orders, this impeaches Dr William Samoei Ruto as the Deputy President of the Republic of Kenya.”

The purported motion attaches gross misconduct and violation of the Constitution of Kenya and other laws as the reasons behind the ouster.

But while responding to the issue, Kieni legislator Kanini Kega refuted the claims that he was sponsoring a motion for DP Ruto’s ouster. Kega instead accused DP Ruto allies of peddling such rumours to whip emotions in the DP’s favour.

“I want to say that we have no motion to impeach the deputy president, we have no intention to do that because that is not part of our agenda,” he said.

The incident comes barely after a week of infighting in Jubilee Party which led to the removal of Elgeyo Marakwekt Senator Kipchumba Murkomen as Majority Leader in the Senate, and his Nakuru counterpart Susan Kihika as Chief Whip.

The two accused their party leadership of victimising them for their support for DP Ruto’s 2022 presidential bid.

However, Jubilee Vice Chairman David Murathe said the party’s decision was made after the duo snubbed went against the aspirations of the party.

The duo, among other legislators, failed to attend a Parliamentary Group meeting in State House, which was chaired by President Uhuru Kenyatta on the day their fate was sealed.

Jubilee Secretary-General Raphael Tuju also refuted claims that the purge is targeting pro-Ruto legislators. Tuju said that the campaign was to tame rebels in the party who were distracting the course and concentrating on politics instead of supporting President Kenyatta to achieve development.