TAMPA, Fla. — Tom Brady has been a member of the Tampa Bay Buccaneers for nearly two months now, although no on-field work has begun because of the coronavirus pandemic. With the offseason program going virtual for the time being, Brady might wind up spending less on-field time with his new teammates. To help them along, ESPN spoke with a number of former teammates on what it’s like playing with Brady.

‘His will to win — it was Jordan-like’

Former Patriots guard and current ESPN analyst Damien Woody, who played with Brady from 2000 to 2003, saw Brady’s rise from fourth-string quarterback to backup. When starter Drew Bledsoe went down because of an injury in Week 2 of the 2001 season and Brady took over, Woody said he felt something special, despite Brady having completed only one NFL pass the year before.

“I just felt like, ‘This dude has it,'” Woody said. “A lot of people ask, ‘Well, what is it?’ It is like a feeling where you just know this dude, he’s so locked in and he knows the plays that have to be made and he makes them. … It was surreal to just be a part of that.”

A 29-26 overtime home win over the San Diego Chargers and a 38-17 road victory against the Indianapolis Colts in Weeks 5-6 propelled them to a .500 record and got things rolling.

“I’ve never been around somebody in the huddle where you just knew — you just knew there was no way we were gonna lose,” Woody said. “He was so prepared. His drive, his will to win — it was Jordan-like. This dude hated to lose, didn’t want to lose, and you as a teammate just felt like, ‘We need this two-minute drill to go win this game, we got this in the bag.'”

Added former wide receiver David Terrell, who was Michigan’s Orange Bowl MVP in 2000, “When he’s out there, it all becomes mythical.”

He still has a chip on his shoulder

Just like Jordan had to overcome not making his high school basketball team, Terrell says he believes the battles Brady fought at Michigan — where he had six quarterbacks ahead of him on the depth chart — taught him how to reach that level.

“In the spiritual realm of thinking, Queen Mother Earth makes no mistakes: Tom Brady put the stamp on that, just his whole NFL career,” Terrell said. “That entire situation at Michigan built the fortitude that’s in him, the Tom Brady that you see today that pretty much goes out and says, ‘F— everybody’ — that’s his mental state.

“If that didn’t happen, Tom Brady wouldn’t be the quarterback that he is. He had to go into his own corner and look at his own self and mentally take challenges that he needed to battle and win with himself … to be a champion in the NFL. You can’t have the mental complexity, the mental strength to fight as hard as he’s fought in the NFL and fight those battles without fighting those battles beforehand and knowing how to fight them.”

Jenna Laine’s most anticipated matchup for the Buccaneers on the 2020 schedule is a game they aren’t favored to win vs. the Saints in Week 1.

Wide receiver Donte’ Stallworth, who played with Brady in 2007 and again in 2012, says he believes things intensified for Brady after the 2000 NFL draft, where he wasn’t selected until the sixth round.

“He’s still playing with that chip on his shoulder about being drafted with the 199th pick. Like, ‘Dude, let it go, bro, let it go,'” Stallworth said, laughing. “‘You’re a six-time Super Bowl champion.’ But he can’t. That’s who he is.

“He won’t talk about it, but he hears the chit-chat [now] about being a ‘system quarterback’ or, ‘Without [Bill] Belichick, Brady wouldn’t be as good as a quarterback.’ … As if he didn’t need enough to drive him already.”

He understands he’s a role model to kids

Even before Brady became a father in 2007, he took a keen interest in children and understood the importance of being a role model to them. Bill Belichick would frequently allow players to bring their families into the locker room, and cornerback Tyrone Poole’s 8-year-old son, Nakai, asked if he could meet Brady his first year in New England in 2003. 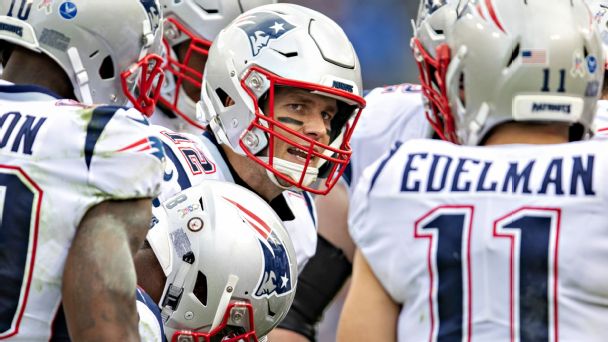 “So I walked him over, and Tom rubbed his head, patted him on the back and said, ‘Hey, what’s your name? You play football? You love football?”‘ Poole said.

“It’s like a kid’s biggest dream. I’m pretty sure the adrenaline was going over. … The only way I could describe it was whenever they had a flyover after the national anthem, and they fly over the open stadium — you can feel the jets. It makes your goosebumps stand up on your skin.”

Terrell recalls when Brady worked out with his son, David Terrell Jr., when he was 8 in Los Angeles one summer. He’s now a junior wide receiver at Howard University studying pre-law.

“It was special,” Terrell said. “That’s my brother. It was something that wasn’t expected … but it was expected. I [will] break my back for him as well. … I could literally call Tom and tell him, ‘I’m in Miami,’ and he’ll be like, ‘OK, Dave, I’m here right now.’ That’s the type of guy he is.”

Terrell said Brady never forgets people, and went to bat for him in convincing New England to sign Terrell in 2005.

“We’re brothers. Not teammates,” Terrell said. “The team in Tampa is gonna fall in love with him — who he is as a man and as a person.”

He’s always been eager to explore new ways of training

Poole, who was already a nine-year veteran by the time he joined the Patriots in 2003, said that even then the young QB was eager to learn how to take care of his body, long before he created his TB12 training method with trainer Alex Guerrero.

“He noticed me hanging upside down and also an exercise where I had my arms extended — straight-arm lat pulldowns,” Poole said. “He came over, and just the type of guy he is — he’s always trying to get better … he asked, ‘What does that work on?’

What you need to know about the Tampa Bay Buccaneers:

Poole explained the hanging helps decompress the spine, and the straight-arm lat pulldowns strengthen the lats in a similar way to deadlifting, but with less risk of injury, and they improve posture.

“The next thing I know, I see him trying it out,” Poole said. “I’m hoping that it kind of helped extend his career.”

Brady’s training now is less about building strength and more about improving functionality and pliability, and reducing inflammation so he’ll recover quicker.

Virtually everyone who has played with Brady has documented what a ruthless competitor he is — from the times he has held up practice because the defense won a two-minute drill and Brady wanted one more shot, to legendary battles with darts and even beer chugging.

“Him and [former Patriots linebacker] Mike Vrabel would go at it all the time. I mean, all the time, Rodney [Harrison], Asante Samuel — they loved jawing at each other,” Stallworth said. “When people talk about Jordan being competitive — it was the same with Tom Brady.”

But it’s not just on the field; it’s everywhere.

Woody said Brady showed up at the offensive line’s weekly BBQ outing and once got into a beer-drinking contest, despite Woody and his teammates having a 100-pound size advantage on Brady’s 225-pound frame.

“This dude just absolutely drank everybody under the ground,” Woody said. “I’m like, ‘Wait a minute.’ When we first started, I’m like, ‘There’s no way in hell that Tom’s gonna be able to battle all us big fellas up in here.’ If there was a wager on this, everyone woulda gotten wiped out. He wiped everybody out. And I was like, ‘Damn. A quarterback just out-drank the offensive line.'”

Multiple former teammates have described practices with Brady as “intense.” Stallworth recalled that one time during a two-minute drill at the end of practice, Brady was intercepted. So he held up practice to do the drive again.

“I saw Brady like begging Josh McDaniels, the offensive coordinator, to give us one more chance to go again because he didn’t want to end that way,” Stallworth said. “We all knew that was the end of practice, but Brady comes over to all the receivers and was like, ‘I wanna go one more. … We can’t end on that s—.’ And it’s like, ‘What are we gonna say? No?’ Of course not.”

Stallworth said Brady loves picking on safeties in practice, and unlike other offenses, where receivers run decoy routes with no intention of actually being a target, there is no such thing with Brady, a lesson he learned the hard way in a preseason game against Carolina.

“I remember during a [preseason] game, I was running one of those routes and Brady threw it to me and I’m like, ‘Holy s—! And it got intercepted,” Stallworth said. “I wasn’t expecting it at all. Josh [McDaniels] walks over to me and said, ‘I know you’re not used to this, but there are no dead routes in this offense. If you’re open, Tommy’s gonna find you. Everybody’s live.'”