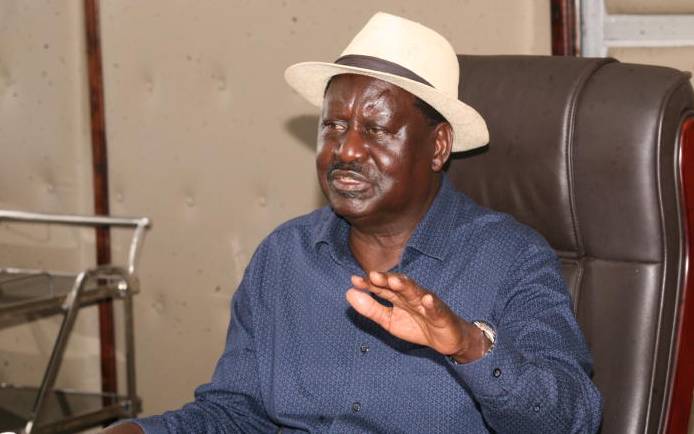 ODM leader Raila Odinga (pictured above)  wants the Constitution changed to address challenges in governance and rectify other provisions that are not serving the country right.

While reflecting on the journey to achieving the Constitution, which was promulgated on August 27, 2010, the former prime minister said time is ripe for Kenyans to review the Constitution because it is a living document that is not cast in stone.

Speaking yesterday at his Capitol Hill office in Nairobi, Raila said he wants changes to the Executive, Judiciary, devolution and any other provision that is contrary to the expectations of a majority of Kenyans.

“We need an inclusive government that has a president, prime minister and deputy president. Other countries like Tanzania and France have this model and it serves them well,” he said.

“A president should not be going to Parliament all the time but a prime minister can go to the National Assembly to answer questions on government programmes.”

He said the incessant squabbles between the Executive and Judiciary are not good for the country, adding that the problems can be solved once there is a clear-cut provision in the law, which each arm of the government cannot flout.

“As it is now, Chief Justice David Maraga can say this is the right procedure but President Uhuru Kenyatta keeps mum. Kenyatta can wish to push his agenda through, but Maraga does not allow him. For a smoother relationship among government arms, let us review the Constitution. Those saying we are doing this to create jobs for some people are liars,” he said.

He proposed that given the resources Kenya has, it is prudent to reduce the number of counties and create third-tier regional assemblies to strengthen devolution.

“Let us have a maximum of 18 counties, much like the Bomas Draft which had between 14 and 18 and 73 administrative units. This will save Kenya some funds contrary to the propaganda of those opposed to reviewing the law. Let us have a proper working structure that serves us well.”

He said though devolution has served Kenyans well by taking services closer to them, it makes sense to reduce the counties to 18 regional assemblies and retain the 47 counties as administrative units without governors.

“Governors have realised the counties are very small. That is why you are witnessing the creation of many regional blocs in Nyanza, Western, Eastern, Coast and Mt Kenya.”