She also has an uncanny ability to delight and surprise at so many turns and may well be the first cruise ship to grace the seven seas with an onboard tattoo and body piercing parlour, a boxing ring and an eyebrow-raising box of sex toys in her bedrooms.

Die-hard cruisers who have experienced set-time seating in the main dining hall will find her disorientating. She offers none of that traditional structure unless you book into one of the Speciality restaurants whose fare, unlike other cruise ships, is included in the fare.

To truly enjoy her, it’s best to be open-minded, be joyful and seek out what pleases you; it’s there somewhere on the ship. Then just relax into the experience.

We don’t like to put an age on it, it’s more a matter of mindset – this cruise is for the young at heart”

Anyone who has been double jabbed and is willing to be tested (for free) is welcome on board this mammoth £500 million 17-deck cruise ship.

Around 2,700 ‘sailors’ (aka passengers) can be catered for in a range of rooms and serviced by a hefty complement of 1,600 crew members, more than enough to ensure that everyone gets the schmoozy “Ahoy there lovely sailor” at least once.

Whatever state of mind you board with, Scarlet Lady will seduce you into relaxation one way or another. Each space has its own energy able to shift your mood with the clever use of decor and hue, mood lighting and music. And there’s always music, even if it’s ambient such as in the disco lookalike lifts.

Once you get to know Scarlet Lady you will be able to pick your pleasure.

You can experience high energy levels say in Razzle Dazzle restaurant, with its bold, brash lines and block colours and fast-paced music in the high energy games’ areas.

Then you can slow it all down at the quiet bar areas and several nooks and crannies with meditative music, low lighting and calming tones. Once you get to know the Scarlet Lady, you will, in effect, be able to pick your pleasure. 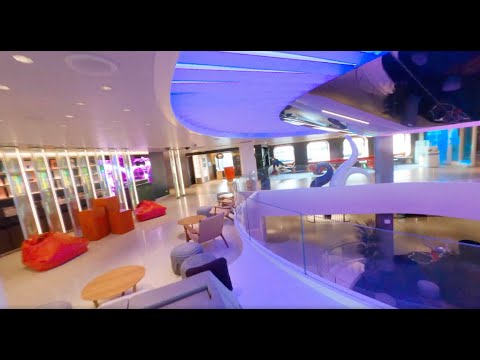 My room 10174A comes with a makeshift wardrobe, a chair and a table and plenty of sockets so that all the tech could be powered up.

The double bed is more than comfy, and if we had wanted to, we could have had the bed changed into a sofa during the day to create extra room. There’s also a small balcony with a dinky red hammock which I would have spent more time in if only it wasn’t so cloudy out.

The shower room was more of a cubicle, really, but turn on the shower and it’s a joyful powerful blast of rainfall water. It’s fair to say the rooms are more than adequate with a little surprise and delight in the shape of a small blue box of sex toys and a bag of massage oils.

For true lux, you have to check-in to one of the many styles of Rockstar Rooms on Deck 15. I got blown away by the sheer gorgeousness of these rooms, especially the flagship Mega rockstar rooms, which have functioning fenders hanging on the walls.

These rooms come fully stocked bars with gins, champers and vodkas, plush fittings and plush bathrooms dressed in marble. Some even have a terrace with a hot bath and a free-standing bath.

I admit to a very serious bout of room envy, but that’s just not very rock n roll, is it?

There are five excellent must-book speciality restaurants that serve food designed by Michelin chefs. There’s no supplement to pay, and each offers unique decor and cuisine. My favourite was Gunbae, a Korean restaurant that BBQ’s at the table but also enjoyed the inventive cooking at the Test Restaurant.

Another 15 or so eateries are at The Galley, a space that straddles both sides of Deck 15. This is a casual pick-n-mix affair where you can get tacos with a myriad of fillings, some sushi from one part, nip over to the noodle bar for some pasta, get takeaway pizzas, or get something veggie from another. You can be as creative as you like. Or just take advantage of table service. The burger bar offers an Impossible Burger; it’s vegan yet tastes just like a meat burger.

Desserts are plentiful and, oh, the Ice cream bar.

Part of the surprise and delight of just being on board is the impromptu singers who sing then disappear, magicians that mingle, and the countless mini-concerts on the itinerary.

There are some pretty good shows too. Duel Reality, a contemporary “aerial-combat circus show”, was inspired by Romeo and Juliet. The acrobatics and the trapeze beautifully depict this touching love story. A quick chat with the star’s show Charlotte O’Sullivan revealed how difficult it is to bend like a pretzel in mid-air while the boat moves with the swell of the sea.

Other shows included a sexology show “Never Sleep Alone”, a comedy show “The Thing” and magician “The Nerd”. All were fun, if a bit corny. Oh, and there’s bingo.

After dark, a Las Vegas-style casino pings and chimes into life, DJs pump energy onto dancefloors – there was a good turnout of sailors wearing red for Scarlet Night disco in the Red Room one evening – and a vibrant Manor nightclub. Many bleary-eyed sailors could be discerned looking for a very late breakfast in the wake of a 3am bedtime.

Away from the pizzaz of nightlife, there’s a swimming pool, hot tubs and jacuzzis and thankfully plenty of beds, cabanas, and sunbeds.

The beautiful spa offers serenity and silence, with several types of steam rooms, saunas, pools and a steam room and a myriad of beauty treatments.

There is a retail deck full of shopping opportunities too.

Scarlet Lady is a rock chick with finesse.

Will Virgin’s new approach to cruising attract a new crowd? We will see but It bodes well.

What I can tell you is that I had my hair done at the hairdresser nattering to a Mavis, a 92-year old sailor who wanted to “tart herself up for when her husband wakes up” then boogied late into the night with sexy young things strutting their stuff on the dance floor.

In essence, Scarlet Lady is a rock chick with finesse. For some traditionalists, this could be sensory overload. For me, four nights didn’t seem enough. I want more.

How much: Four-night sailings cost from £1,235 for two, full board in a Sea View cabin. This includes food and basic drinks. Speciality coffee such as double expresso and, of course, alcohol attracts a charge. VirginVoyages.com