A firm stance by President Uhuru Kenyatta and ODM leader Raila Odinga against a review of the BBI report threatens to trigger an aggressive ‘No’ campaign.

The ‘Yes’ and ‘No’ sides could widen the political rift, jeopardise Uhuru’s national unity agenda and poison the 2022 political climate.

Already, churches, some civil society groups, pastoralist counties, MCAs and women’s organisations have warned they would reject the document if it is not amended.

The growing disquiet is likely to bolster Deputy President William Ruto who is said to be gearing up for a political duel with his boss.

The pressure to have the BBI report opened up for further amendments has boxed the President and his handshake partner, Raila, into a tight corner as they seek national appeal.

On Friday, former Githunguri MP Njoroge Baiya admitted that lack of consensus among the key players could be a recipe for a highly divisive referendum.

Uhuru and Raila have insisted that the Building Bridges Initiative report is the magic potion that will cure the country’s ills but critics say it is a 2022 Trojan horse for the political elite.

“Whether to open up the document for review or not is the President and Raila’s dilemma at the moment. The dissenting voices are indeed growing and it would be important if some convergence is established,” Baiya told the Star.

The former National Assembly Constitution Implementation Oversight Committee member argued that some consensus would avert a dispute likely to spill over to the 2022 election.

“The referendum, if it were to happen, would be just like a year to the 2022 election. If done in an environment of sharp divisions, then be sure that would greatly influence the 2022 outcome,” he said.

Uhuru and Raila’s allies, however, say some of those pushing for changes seek to scuttle the process.

“The thing is how much room do you want to create? In any case, why are people invited to vote? A vote is held because there is a team you will not satisfy but you can always move with the majority,” Ndaragwa MP Jeremiah Kioni said.

Political risk analyst Dismas Mokua said the President and Raila have an opportunity to allow other stakeholders to give their proposals to ensure a non-contested referendum.

“Failure by the two to be flexible to accommodate other stakeholders, whether they took part in the initial process or not, would give credence that they are creating room for opposition of the document to serve their 2022 political interests,” he said.

Mokua said many Kenyans will not have any incentive to oppose the BBI report if Uhuru and Raila agree to create a consensus.

“The BBI architects can accommodate other views as much as they do not compromise the referendum calendar,” he said. 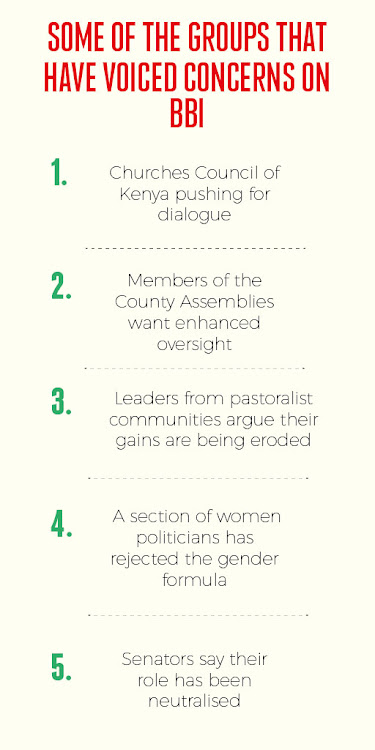 Already, Ruto’s allies say Uhuru and Raila should prepare for defeat if they do not seek consensus on contentious issues.

“There is no hurry to rush something like constitutional amendments. [A] majority of Kenyans have expressed reservations on some of the proposals and it is important to address their concerns, otherwise, the bill will be rejected in toto,” said Mumias East MP Benjamin Washiali.

According to the BBI roadmap that was unveiled on Monday in Naivasha, the country will go into a referendum by June 2021.

However, while Uhuru and Raila require support in the national referendum, refusal to adopt views by other actors could build a force that might threaten it.

The National Council of Churches, for instance, has said that the country’s unity efforts would be punctured if consensus is not built and draconian clauses expunged.

NCCK wants the proposed abolition of the National Police Service Commission and the creation of the Judiciary ombudsman revisited.

“It is for this reason that the Dialogue Reference Group of which the NCCK is a member, has consistently urged for various measures to inclusion,” said NCCK secretary general Canon Chris Kinyanjui.

The umbrella organisation of protestant churches also opposed the proposal to have Cabinet ministers appointed from the National Assembly.

In the 2010 constitutional referendum, the church supported the ‘No’ campaign, which lost after 68.6 per cent of Kenyans approved the new document. The church joined Ruto in opposing the Constitution.

Ruto has dismissed sections of the BBI report — suggesting a number of changes — some of which antagonise President Kenyatta’s reform agenda.

The DP has maintained studious silence over his next moves after Uhuru and Raila hosted pro-BBI leaders in Naivasha on Monday and resolved to reject pressure for any amendments.

Political experts have warned that a divisive referendum would be counterproductive to the efforts by Uhuru and Raila to unite the country and bequeath it peace and prosperity.

Former National Assembly Justice and Constitutional Affairs committee chairman Abdikadir Mohamed on Friday was pessimistic that the BBI process would be objective without consensus.

The former Mandera Central MP said the BBI push lacks key elements that could guarantee its legitimacy and inclusiveness.

“Who are the actors and organs? Are they legitimate, inclusive, neutral and objective on the process and; what are the protocols for authentication, control and security of the product?” Abdikadir said.

The pastoralists have argued that the BBI proposals would erode their gains and want their concerns addressed.

The President and Raila are on Monday expected to hold a forum with governors and MCAs as they seek to lobby them to back the report without amendments.

The MCAs have raised some concerns including seeking that county executive committee members be appointed from the assemblies as with the national government.

“Whatever is happening at the national level to facilitate MPs do their work must be replicated in the county assemblies,” said the Counties Assemblies Forum chairperson Ndegwa Wahome.

Inua Mama lobby group, affiliated to Ruto, has also threatened to reject the BBI Bill, saying it is ambiguous on the two-thirds gender rule.

“Our review of the document has revealed that BBI is waging war against the women of Kenya. It takes away the fundamental rights of women, especially on the two-thirds gender principle. It negates the principle of inclusivity upon which the Constitution of Kenya, 2010, is founded,” they said in a statement.

Every NBA player who becomes eligible to be traded on Dec. 15 ahead of NBA trade deadline