By the time William Ruto climbed the stage at Nyayo National Stadium for the last of his presidential campaign rallies in the city before the election on Tuesday, the atmosphere had already been set for a raucous response to his speech.

He did not need to talk, and in fact didn’t for a few seconds as the crowd chanted “Ruto! Ruto! Ruto!”.

The DP appeared delighted. Oh yes, he did. There was a tiny glint in his eye as he peered into the crowd going wild for him just below his feet and let out a charming smile.

If he had come here looking for acceptance and a stamp of approval, the DP had received it. Earned it.

Speaker after speaker had before him stoked the embers of the “Hustler” movement, promising to end the suffering occasioned by the Jubilee administration, calling President Uhuru Kenyatta a few colourful names, and repeat

ing the claim that Azimio la Umoja One Kenya Coalition party leader Raila Odinga –  the Deputy President’s arch-nemesis in the election – is a state-sponsored project. 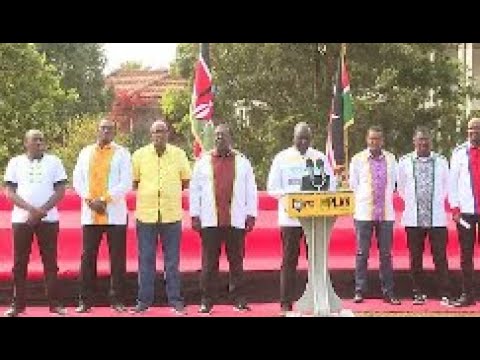 William Ruto’s “Hustler” narrative cuts to the bone, especially when delivered in the powerful way he has learnt to.

As he talked, his words turned into something else. They gained a life of their own and floated over the stadium like the pregnant clouds of this August day.

Ruto was not campaigning; he was preaching. And his followers hang onto his every word with religious dedication.

There was a chant here, a vuvuzela blare there and the deafening sound of thousands of whistles being blown at the same time.

The Deputy President was the star of the moment on this stage, delivering his short speech with the powerful oratory he has mastered on the campaign trail and urging his followers across the country to join him in the “liberation” movement against the high cost of living, impunity, extra-judicial killings and other ills of the administration he says he has served with one foot in and the other out.

He spoke with his right palm folded into a fist, punctuating his every statement with a punch in the air.

Watching him, it was hard to believe how taxing his day had been. At the crack of dawn, Ruto had called a press conference in his official Karen residence before leaving for two rallies in Maai Mahiu and Suswa, then flew back to Nairobi for the Nyayo rally, after which he left for Kiambu for another at Kirigiti Stadium.

The tight schedule of this last campaign day, the back-breaking commutes and speeches in the heat of the moment, perhaps illustrate the strength of purpose and admirable doggedness with which the Deputy President has approached this election. 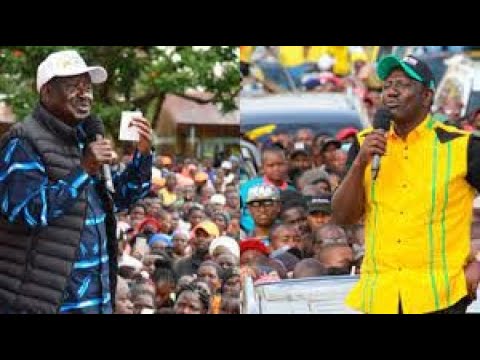 Dr Ruto has visited literally every corner of the country to preach his renaissance gospel and, as his political groupies like to say, “listen to the ground”.

He has stood firm and spoken with authority and clarity in every of those visits.

Those who will vote for him on Tuesday say Dr Ruto has the presence of mind, the stamina and the intellectual heft to lead the nation.

They argue, too, that Mr Odinga is a spent force whose best days are long gone.

The DP rode into Nyayo yesterday on the back of the six-wheeler that has in recent days become part of his show.

As he did a loop around the stadium, with his running mate Rigathi Gachagua sitting next to him, the deejay played “Mkono wa Bwana”, the popular Kiswahili gospel song by Tanzanian musical group Zabron Singers, on loop.

Thousands sprang to their feet to welcome their man. As I leaned over the edge of the stadium to catch a glimpse of the action, a young man elbowed me to the side and instructed me to let his mother see their “incoming president”.

I stepped aside and looked back to see and elderly woman, perhaps in her 70s – her back bent with age – struggling to see the action below.

Without a word, I moved aside and let her have her moment with her “president”.

I am going to make a claim that has no scientific basis, but which is anchored on observation only; William Ruto has a huge following among women.

The stands at Nyayo had more women than men. And the women were also the louder of the two genders.

They pushed and shoved and sang and danced their hearts out. And when they ran out of steam, they climbed down the stands to the patch of grass surrounding the artificial track, where they rested, with some sleeping altogether.

Every now and then, they would be roused by a jibe from the stage and erupt in ululation and political chants.

Most of the speeches focused on Mr Kenyatta’s “terrible performance” as President and “terrible choice” in the Raila “project”.

And none of the speakers, perhaps, had more scathing words than Gatundu South MP Moses Kuria, who called Mr Kenyatta “the pettiest” president in the history of this country for what he claimed are a series of persecutions against the President’s ideological opponents.

Mr Kenyatta and the Azimio presidential candidate featured heavily in the speeches, castigated by all as unable to lead the nation and masters of a capture of state resources that has enabled corruption and caused economic mayhem.

Like in many other such political encounters, no evidence was tabled to back the claims.

And, going by the mood in the stadium, no one had come here for evidence.

This was some sort of a political pilgrimage, and the messiah was speaking. Who could question him?

If Kuria was rabble-rouser-in-chief, Mike Kioko Mbuvi Sonko was the unofficial kingmaker.

The former Nairobi governor, who was kicked out of office two years ago in a cloud of accusations of embezzlement and mismanagement of public resources, and who was blocked from running for the Mombasa governor seat on integrity questions, used his few minutes with the microphone to drum up support for the coterie of Kenya Kwanza politicians lining up to lead the city, including Johnson Sakaja for governor and Millicent Omanga for Woman Representative.

Sonko, in the fleeting moment he spoke, exemplified the populism around which political mobilisation in the city, and indeed the country, is built.

He also showcased the spectacle of the political godfather in the dogmatic enterprise that produces Kenya’s leaders.

Those whose names he called out, and who all quickly stood up to acknowledge the endorsement, wore the validation up their sleeves as testimonials that they were the chosen few.

And then, just as it had started, it abruptly ended. The stadium started emptying even before Ruto finished his speech.

It was getting late in the day and people had buses to catch home and the Deputy President had one last-ditch rally to address in Kiambu.

The crowds in the stands emptied within minutes. The deejay started playing “Freedom in Coming Tomorrow”, the catchy song by South African Mbongeni Ngema that was made popular by Leleti Khumalo in Sarafina, the 1992 musical drama film.

How, or when, “Freedom is Coming” became Ruto’s clarion call, away from the earlier “Bottom-Up”, is unclear.

However, at Nyayo yesterday, that clarion call, which has become the Hustler Movement’s anthem, was everywhere – on T-shirts, posters, blared through the public address system and on everyone lips.

For William Ruto and the millions who believe in him, freedom is coming on Tuesday when they line up to vote.