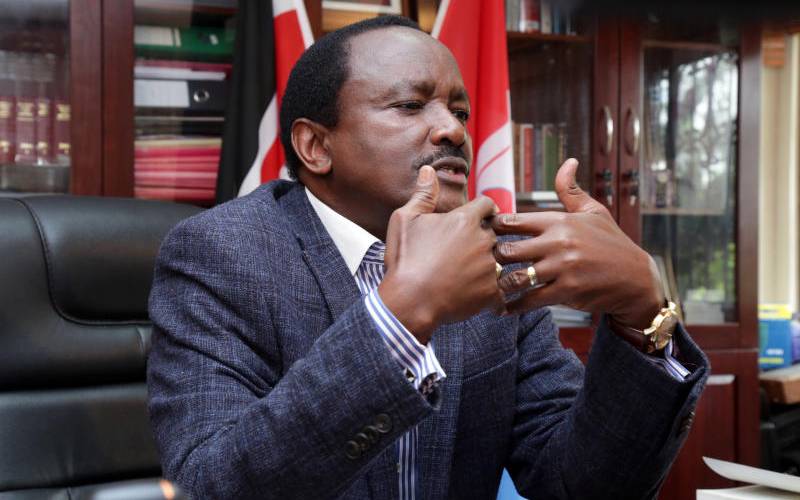 Wiper Party has signed a cooperation pact with the ruling Jubilee party formalising their partnership that had been mooted by the former vice president Kalonzo Musyoka.
The deal between the two parties was penned at Jubilee Party Headquarters in Pangani, Nairobi, after which leaders drawn from the two parties held a joint press conference.
In the attendance were Wiper Party leaders Kalonzo Musyoka (above), Makueni Senator Mutula Kilonzo Jr, former MP Chirau Mwakwere and Judith Sijeny. From the Jubilee side were Secretary-General Raphael Tuju and Vice-Chairman David Murathe. The group was also joined by Chama Cha Mashinani leader and former Bomet Governor Isaac Rutto who has lately been dallying of Jubilee.

SEE ALSO: Why should we pay rich Raila, Kalonzo millions?

When asked about their status in the Nasa Coalition especially after teaming up with Jubilee, Kalonzo defended the deal claiming that Nasa outfit could not hold any party ransome because there was no activity going on or being planned. For instance, he claimed that the last time coalition had a summit was after the 2017 elections.
He revealed that his party was teaming up with Jubilee in preparation for the 2022 politics, and had no plans to remain in the opposition.
“Our friends in ODM have decided that they will continue in opposition,” said Kalonzo.
Kalonzo, who was the running mate of ODM leader Raila Odinga in the 2017 General Election, did not reveal much the contents of the agreement between the two entities. He only hinted at possible sharing of slots in the parliamentary committees.
“In the area of Parliamentary Committees, that I think was covered by the negotiators. The rest of the things we will leave to time,” he remarked.

The Wiper boss rubbished rumours that he was preparing to join the government as a new Cabinet Secretary saying that he is in the Wiper steering wheel to stay.
“If I was to join Cabinet, would you expect that I would relinquish, my position as a party leader to years to the election?” he posed.
Mr Murathe praised the deal as a landmark decision that will help both parties in and outside parliament. With restructuring being a possibility after inking the deal, CCM leader Isaac Rutto defended Wiper’s possibility to consider changing its leadership in the Senate and National Assembly.
“Whipping is an integral part of party discipline and it is ok for Wiper to de-whip its membership to follow a clear policy party line,” he said.
The incident comes nearly a month after Wiper’s National Executive Council (NEC) cleared Kalonzo to enter into the political deal.

“National Executive Council of the Wiper Democratic Movement-Kenya, meeting under the leadership of the party leader Kalonzo Musyoka, has today authorised Musyoka to seal a cooperation agreement with Jubilee and Kanu with immediate effect,” said the party in a statement.