Kwale Woman Representative Zuleikha Hassan was ordered out of Parliament for disrupting the Wednesday morning session after walking in with her five-month-old baby.

National Assembly presiding Speaker and Luanda Member of Parliament Chris Omulele ordered her out of the chambers for causing disorder, saying that what had happened was “unprecedented”.

“This is my third baby in Parliament; I’ve never done this. I’ve tried really hard not to come with a baby but today I had an emergency so what was I supposed to do; miss parliament and my duties just because I have a baby? That’s why I came with her,” explained Zuleikha.

Alego-Usonga MP Samuel Atandi sided with Zuleikha and tried to block her from leaving the House, blocking Parliament orderlies from removing her. Women MPs also intervened, threatening to walk out with Zuleikha.

Atandi was also ordered out of the chambers following the drama.

“I had an emergency; I have to come to work. We had two sessions today, the morning one and afternoon one. In 2013 the Parliamentary Service Commission asked if we should have a room, a crèche where we can put our babies, for breastfeeding, and stuff (sic) for members and other parliamentary staff.  As you ask for more women to come into Parliament, you need to provide a family-friendly atmosphere at work. Other companies are doing it and the country’s parliament is not doing it, unfortunately … She (her daughter) is still breastfeeding and I’d like to breastfeed her for as long as I can,” lamented Hon. Zuleikha Hassan.

The Speaker, however, said that the Parliamentary Service Commission has provided sufficient facilities for breastfeeding members to feed their babies thus they are not supposed to go with them inside the debating chamber.

When asked if she was trying to drive a message, it is World breastfeeding week after all, Zulekha fervently denied saying, “No, I’m not. I’ve been in Bunge since 2013. I’ve never done this; this is my third child. Today kuko na (there is an) emergency so I had to. I had no other way. And I thought why should I miss work?

Because that’s like I’m being punished for having a child and it’s a very natural process.”

Speaker Omulele added that no further action would be taken on Kwale Woman Rep Zuleikha Hassan. 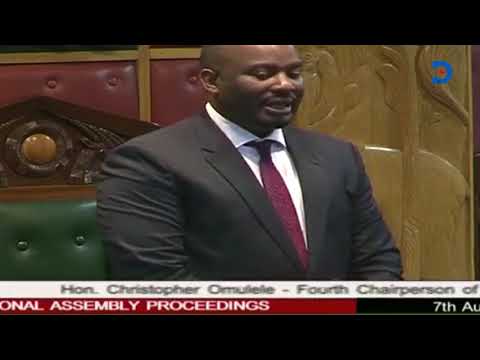 This is the first time a Kenyan leader has brought a child into Parliament Chambers during sessions.

Other such incidents have occurred in other parts of the world few have embraced it on certain ocassions but it has mostly been frowned upon.

In Australia for instance, in 2001, a member of the House of Representative, Anne Burk brought her baby who was under three-months-old into the chamber on two occasions, but she received a note from the Speaker indicating that other members had not approved. In June 2009, Senator Sarah Hanson-Young went in with her two-year-old child but the president ruled that the child be removed.