(CNN) — Imagine if you were a better person. More beautiful, more cultured, with exquisite taste and a well-upholstered bank account.
Now imagine what your home would be like.
Lisbon’s Casa Fortunato, a teensy hotel run in an Amoreiras townhouse by architect couple António Falcão Costa Lopes and Filipa Fortunato, is a bit like that.
Patterns pop with pizzazz, light floods high-ceilinged rooms, chic mid-century furniture mixes with quirky contemporary pieces.
It impressed the team behind boutique-hotel booking service Mr & Mrs Smith so much that it’s just been named Best Smith Hotel 2019, the top category in the annual Mr & Mrs Smith Hotel Awards.

Casa Fortunato, says Mr & Mrs Smith founder James Lohan, “embodies the very concept of ’boutique’ — a unique, family-run, nine-suite townhouse in the city of the moment, which we hope even more people will now discover and enjoy.”
It was one of 12 hotels honored at an exclusive press dinner at Los Angeles’ San Vicente Bungalows on October 10.
The Big Easy’s Maison de la Luz, a former City Hall annex where Mr and Mrs Smith say “you’ll be seduced by tactile touches and local-leaning artwork,” was named Best Date-Night Bar. The hotel’s Bar Marilou, it says, “is an intoxicating muddle of Caribbean cool, French elegance and Southern juke joint.”
The World’s Sexiest Bedroom, however, is found over in Asia. Joali Maldives opened in October 2018 and was praised by Mr & Mrs Smith for boldly throwing away the “resort rulebook.”
The “pinnacle of their extraordinary vision is the Sunset Water Villa,” which offers beach, garden and ocean views and can accommodate up to three people comfortably — if that’s your thing.

Other Asia winners include Malaysia’s Datai Langkawi, named Best Family Hotel, and the Seychelles’ private North Island — a spot that has entertained the Clooneys, the Beckhams and the Duke and Duchess of Cambridge — which scooped the Above & Beyond award.
In Europe, Italy’s Palazzo Daniele was named Best-Dressed Hotel. Housed in a 150-year-old townhouse, Palazzo Daniele was praised by the judges for “combining the finest Italian craftsmanship, quirky details, and expertly curated artworks with a lived-in and slightly rustic sensibility.”
Greece’s Euphoria Retreat, in Mystras, won the award for Most Spoiling Spa. This wonder of unwinding has a tepidarium, infrared saunas, meditation room, sensory deprivation pools and — in true Greek style — it even has a labyrinth.
For those who prefer to relax with a knife and fork in hand, The Pig at Bridge Place, in Kent, UK, was named Best Gourmet Getaway. Here in the heart of “the garden of England,” food is sourced from a 25-kilometer radius.
The Best Budget Boutique category returned this year and was awarded to Sands Hotel & Spa in Palm Springs, which boasts the kind of pastel pink exteriors and gaily printed mid-century furniture for which this corner of California is famous.
Brazil’s Uxua Alma Casa Anderson was named Best Smith Villa, Mexico’s L’Otel at Dôce 18 Concept House was the Coolest Creative Hub, and Africa was represented by Salt of Palmar in Mauritius, which won Local Hotel Hero.
Related content 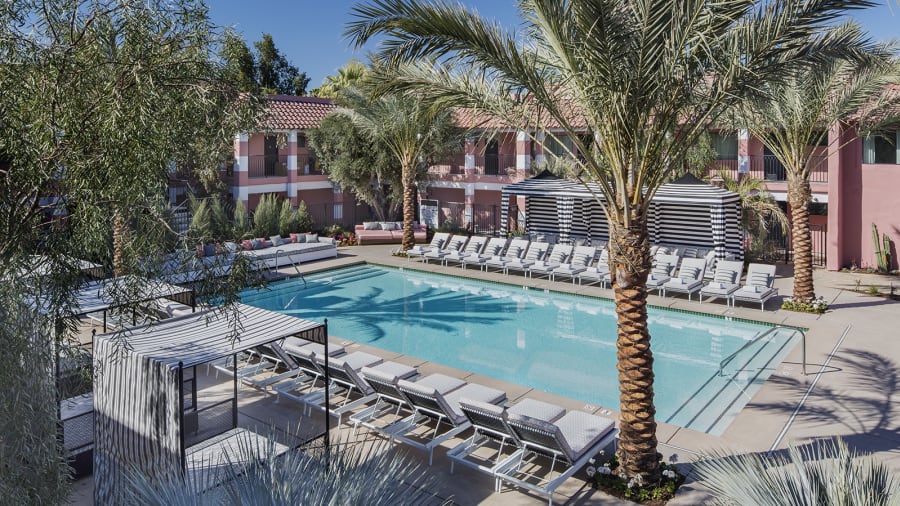 The Essential Items Nurses Always Keep In Their Bag