Jenna Laurenzo hopes to convey “love, humor, playfulness and hope” to audiences via an inclusive new project released in time for Valentine’s Day.

The actor and filmmaker brings the central couple from 2015’s “Girl Night Stand” into the COVID-19 era with her latest film short. “Girl Night Stand: Chapter 2,” released Friday and viewable above, follows Katie (played by Laurenzo) and Sarah (Meryl Jones Williams) as they try to decide whether to cast their masks aside to reignite a long-dormant romance.

Laurenzo, a New Jersey native, rose to prominence with the original “Girl Night Stand.” Intended as a proof of concept for a full-length feature, the nine-minute film depicted a young woman questioning her sexuality after an unexpected same-sex hookup. After the clip was uploaded to YouTube, it instantly went viral, and has now been viewed more than 13 million times. 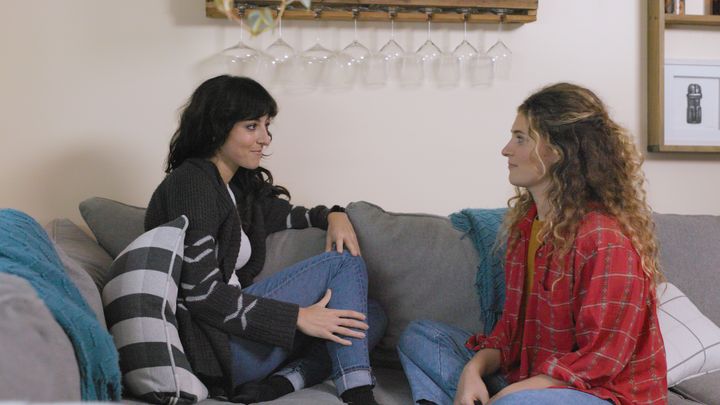 “I had been wanting to return to these characters for a long time, but nothing ever grabbed me as a reason to dive back in,” Laurenzo told HuffPost. “When the pandemic hit, I started thinking about how these two would reconnect, and then similar to the first, the idea hit me in a flash.”

As an actor, Laurenzo has since appeared in 2018’s “Green Book,” which won three Oscars, including Best Picture. That same year, she made her feature directorial debut with “Lez Bomb,” a holiday comedy that boasts Bruce Dern and Cloris Leachman in its ensemble cast.

Still, she remains indebted to the success of the original “Girl Night Stand,” and was eager to express her gratitude to fans with a follow-up short.

“Girl Night Stand: Chapter 2,” she said, “forced me to be creative in ways I hadn’t explored prior.”

The finished product was shot entirely at Laurenzo’s Jersey City apartment with minimal crew and social distancing protocols in place. “The River,” a new song performed by the actor and filmmaker, is played during its opening sequence.

“At a time in which connection is so important, craved for, and needed, I tried to explore the depth of connection,” she said, noting that she’s developing a scripted series incorporating the “Girl Night Stand” characters. “Even fleeting moments leave an imprint on us. … Those intense moments of connection present a door in which we have a choice to enter or flee. I’m hoping the audience finds them asking themselves what they’d do.”

A HuffPost Guide To Coronavirus

Question weighs heavily over Paulo Costa vs. Marvin Vettori — Which one will remain a UFC contender?