When Real Madrid played Real Betis at the Bernabeu last Saturday, one of LaLiga‘s top forwards was seeking to add to his four-goal tally on the young season.

We’re not talking about Karim Benzema, though — he remains on three league goals — but Betis forward Borja Iglesias, who is just behind Barcelona‘s Robert Lewandowski and Celta Vigo‘s Iago Aspas in the Pichichi race (both with five goals).

Iglesias, 29, has been around for a while. He came through Celta Vigo’s academy, shone on loan at Real Zaragoza and got his top-flight breakthrough with Espanyol, where 17 league goals in 2018-19 convinced Betis to sign him for €30 million.

But he’s never had a start to the season like this: scoring in Betis’ opening 3-0 win over Elche, converting two penalties in a 2-1 victory at Mallorca and scoring the only goal in a 1-0 win over Osasuna. It’s the kind of form which has people talking about a surprise call-up for Spain at the 2022 World Cup, for a player who has never played for his country, at any level.

Iglesias — nicknamed ‘Panda’ by teammates because of his love of that Desiigner song you couldn’t get out of your head back in 2016 — has never been a conventional footballer.

As a boy, he was so obsessed with football that he would make his parents take him to nearby Santiago de Compostela airport late at night in the hope that they would coincide with LaLiga teams flying home after an evening game against Celta Vigo to ask for photos and autographs.

In 2020, he took to painting his fingernails black, saying it was a small gesture aimed at reminding himself to use his position to fight against racism and homophobia. “I also have to admit — I like it,” he tweeted.

While he couldn’t score for the first time past close friend Thibaut Courtois — the pair share a love for video games and have invested together in the eSports team DUX Gaming — Iglesias and Co. put up an admirable effort in the 2-1 loss that saw Betis drop just their game of the season .

Ahead of the game, Iglesias spoke to ESPN’s Martin Ainstein for a new episode of The Bicycle Diaries, talking about his form, mental health and his admiration for Benzema.

Editor’s note: This interview has been edited for clarity.

ESPN: How can you explain this improvement in goal scoring?

Iglesias: It’s incredible. Sometimes, if you sit and think about it too much, it makes you feel a bit dizzy.

ESPN: It’s hard to enjoy things in such a professional environment, with so much pressure, so much stress.

Iglesias: Totally. At times I think it’s been harder for me to be at my best, because I wasn’t enjoying it. The pressure I was putting on myself was asking so much of me that I wouldn’t allow myself to enjoy it. I wasn’t connecting with my true self, with what I like, which is playing football, right? So of course, you’re not performing at your best. I was stressed out. Sometimes I’d go to bed saying that I hadn’t enjoyed my day. It didn’t make sense, because I was doing what I’d dreamed about since I was little.

ESPN: You’re one of the few footballers who have opened up, who humanize the profession, and that’s needed. With footballers being where they are, earning what they earn, having a high-profile position in society, they’re expected to be a robot, to be almost perfect in absolutely everything. And that can be counterproductive.

Iglesias: Yes, the truth is I think it’s something we have to normalize, and not just inside sport. Mental well-being is so important but of course, sometimes it’s hard to say that you aren’t OK. Because sometimes it’s like ‘How is he not OK if he’s a footballer, he earns money and the fans love him?’ Well, sometimes, for whatever reason, you aren’t OK. Sometimes it feels like you’re financially well-off, or you’re in the news, or you’re doing what you really enjoy, or whatever, but you’re not OK. Sometimes all those factors don’t allow you to be OK. It feels like something you can’t say, but the reality is that it happens sometimes. 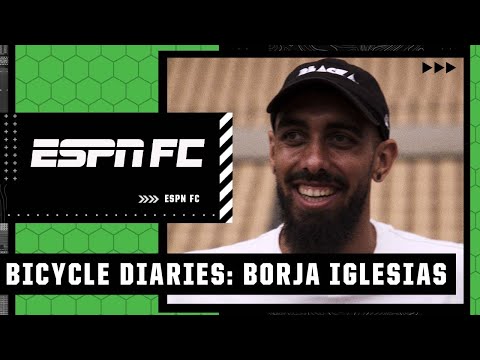 Iglesias: I’ve always felt supported by [my teammates], and the coaching staff, and the professionals who help you with these things because they’re trained in it and they have the tools to help you get back to connecting with yourself and to feel happy again, to enjoy yourself. For me, [the psychologists] have given me a way of looking at life which I wasn’t allowing myself to see because I was too demanding.

ESPN: It’s like you have to be strong, do everything well, because in a way if I have this, if I have that …

Iglesias: Of course, how can you not be OK if you have everything? And the truth is I felt like that at times. I used to say ‘I can’t be unwell.’ And of course you can be unwell. Of course one day you can get up and not want to go and train, or another day you go to bed and say ‘what a s—– day,’ forgive the expression. Sometimes it happens, and you also need those days to appreciate the really good things. If it was all good, it would be too easy, right? You won’t make much progress if things don’t get difficult. I’ve suffered in that process, but I appreciate it a lot too.

I think it’s nice to get away from the typical interview, talking only about football. I’d like to see teammates doing something like that, because they have a lot to offer. Sometimes you don’t want to, or the situation doesn’t allow it, or whatever, but it annoys me a lot, the stereotype that footballers don’t have anything to offer. Obviously, there are people who are more qualified, because of their circumstances in life. Everyone’s experience is different. There are experiences that my teammates have had, that they could talk about, and then I can talk about others. It’s nice to listen to other people. Often you put yourself in their place and, as we were saying, you see that they’re people who you might idolise or admire for whatever reason, but they have your problems too.

ESPN: What was a key moment for you?

[Betis captain] Andres Guardado had a big impact on me at a difficult time [last season]. We played at home against Sevilla, the team played really well and I was really bad. I lost the ball a couple of times, when I practically tripped over the ball. That day I went home feeling really down. He noticed and he sent me a message. I remember he said to me: “You’re reaching your peak as a footballer and we all believe in you. Keep going, because you’re almost there.”

And two weeks later, I scored twice (against Real Sociedad in the Copa del Rey on Jan. 26). Since that moment, I’ve had two seasons, or one-and-a-half plus the beginning of this one, that have been really good. I think that message helped me a lot because that day I needed somebody to tell me exactly that. And of course, when Andres Guardado tells you that, who has played in or is going to play in his fifth World Cup (with Mexico), it’s amazing.

ESPN: The balance you have in the dressing room is achieved partly thanks to players with a lot of experience who know how to bring something to strengthen the group.

Iglesias: Totally. What they give us on the pitch, and it’s a lot, is nothing compared to what they give us off the pitch. They see things in a different way, and they’re people who have the ability to express it and help you with three words, in a moment where you’re not even aware of what’s happening. They’ve been a fundamental part of the well-being of the group, because in the good moments they know how to keep all our feet on the ground, and in the tough moments they know to be positive, how to help us grow.

Iglesias: The truth is he’s one of the [players] I most enjoy watching. I’ve enjoyed watching him for years. In a way, he’s been a bit of a role model for me, seeing that he’s been criticised, that there were a lot of doubts about him. I also think that what’s admirable is the capacity he has to adapt himself to what the team needs. More than what he would really like — because I’m sure he would like to be the main man, always scoring goals and all that — he has adapted.

ESPN: Is that what you’d highlight about him — that maturity, intelligence and adaptability?

Iglesias: Yes, I think those three things are what have helped Karim take that step forwards in the last few years. In terms of technique we’re talking about maybe the most technical forward there is, with a huge capacity to score goals. It’s a pleasure to watch him, because when you see him live, you realise that he doesn’t lose a single ball. Every touch is good, every touch makes sense. He doesn’t look quick, but he’s quick. He’s really good, really good.