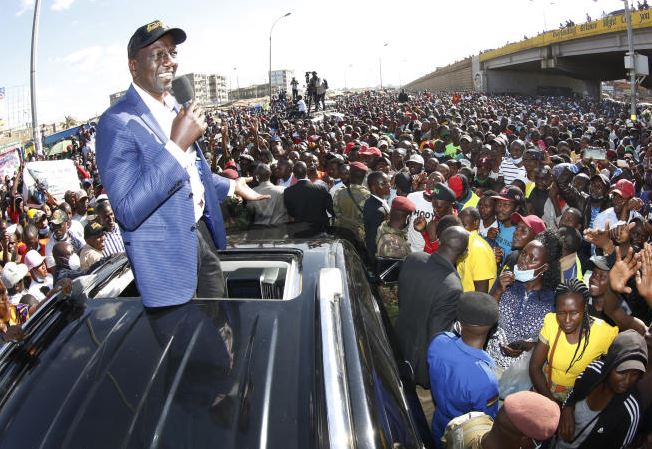 Deputy President William Ruto has postponed his planned events in Nyamira County to next week Thursday.

The DP (pictured) who was expected to conduct a funds drive for bodaboda riders in the region said that all stakeholders involved had arrived at the decision, as the disruptive dispersal of Kenyans engaged in economic empowerment by police was unnecessary.

Ruto tweeted: “After consultations with MPs Kemosi, Mose, Nyamoko, the bodaboda sacco and church leadership who had invited us, we have postponed the two functions in Nyamira County to Thursday next week.”

On Thursday morning, The Standard team on the grounds reported chaotic scenes emerging as police engaged the forming crowds in running battles.

Police tear gassed the crowds while some Ruto’s supporters braved them and others scampered for safety.

Tension was rife at Kebirigo Primary School in West Mugirango Constituency, Nyamira County, with anti-riot police at the venue where Deputy President William Ruto was expected to conduct a funds drive.

The postponement comes in the wake of new resolutions announced by the National Security Advisory Council (NSAC) chaired by Head of Public Service Joseph Kinyua yesterday.

NSAC called for compliance with the Public Order Act during public meetings and processions amid heightened political tensions ahead of the 2022 General Elections.

Recently, politicians have been moving across the country on tours, with different agendas.

Some have turned rather chaotic and violent, case in point on Sunday when chaos ensued pitting two rival political factions in Kenol, Murang’a County, that resulted in the death of two people.

The incident disrupted transport along the busy highway as burning tires smoldered on the road, forcing motorists to seek alternative routes.

This happened moments before the arrival of Deputy President William Ruto in the small town for a fundraising event.