This is despite Mr Odinga’s rallying call for his supporters to come out en masse and vote for him. 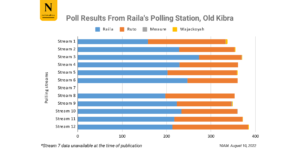 The polling centre has 12 streams and by press time, data from one stream was still pending.

On Tuesday, the former Prime Minister showed up at the voting centre flanked by hundreds of supporters who even went ahead to display their marked index fingers.

In contrast, Kosachei, the polling centre where his closest rival William Ruto voted had a 77.5 percent voter turnout.

That is not all. The Deputy President put on a brave fight at the Old Kibra Primary School polling centre.

Read more on the elections here.