Ngunjiri, an ally of Deputy President William Ruto, was among the 235 MPs who voted in support of the bill on Thursday night.

Ruto and his allies have been critical of the BBI Bill which they say is only meant to create positions for some people and in the long run burden the taxpayer.

Ngunjiri’s move to support Bill came as a shock to many, including his supporters, and could be viewed as a betrayal of DP Ruto and his Tanga tanga team.

The second term MP, who spoke to The Standard Digital on Friday, however, said he didn’t betray Ruto. Ngunjiri said he is still on good terms with the Tanga tanga team despite his change of tune.

Ngunjiri maintained that he voted based on his conscience, and especially because of the benefits the constitutional amendments are set to bring to residents of Nakuru.

“I voted without being influenced by anyone and that does not amount to betraying to DP Ruto. The Bill is good for Nakuru County and that is an important thing. I voted in support of the Bill but I still remain on the front line in drumming support for a Ruto presidency in 2022,” said Ngunjiri.

Last year, Ngunjiri criticized ODM leader Raila Odinga after he likened the BBI Bill to a big snake that would swallow those opposed to it.

The BBI is a product of a truce between Raila and President Uhuru Kenyatta after the two bitterly clashed over the outcome of the 2017 General Election. Raila claimed that the elections were marred by irregularities that saw Uhuru’s victory nullified by the Supreme Court. A rerun called which Raila boycotted.

Ngunjiri said his change of tune was partly informed by Ruto’s bottom-up economic strategy which, according to him, is in line with the proposed constitution changes.

“In Nakuru County, we are getting five new constituencies. This means more funds coming to the grassroots in addition to the plan to give 35 per cent national revenue to counties. That is in line with the bottom-up strategy that Dr Ruto is pursuing,” he said.

At the same time, the MP also clarified that Ruto and his allies have never rejected the proposed changes. He said they only called for the shelving of the plan to allow the government to focus on priority areas of development.

Two weeks ago, during a press conference, Ngunjiri termed the Bill as a missed priority. He the government should instead spend the funds it planned to use to bankroll the referendum on fighting the Covid-19 pandemic.

“I have also come to learn that the government has sourced funds for procurement of vaccines. If such plans had not been made, I would have stood my grounds,” said Ngunjiri.

Naivasha MP Jayne Kihara was among the 83 members who voted against the Bill. He constituency is among the highest populated and is set to be split into more units.

“Everybody is independent and I can’t say Kihara was right or wrong by voting No. She too has her own calculations which I believe are for the good of the people she represents,” said Ngunjiri. 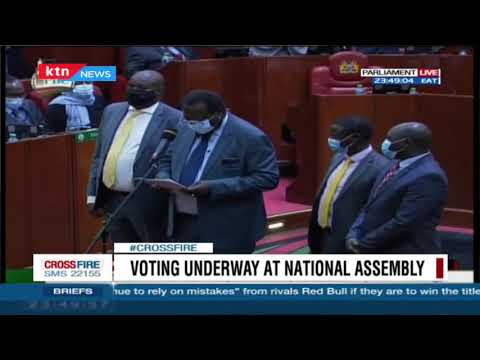