MyPillow boss Mike Lindell has a new obsession. And it’s not his debunked claims of election fraud.

“It’s like the Jerry Lewis telethon if Jerry was on a public access channel and crack,” Kimmel explained. “Phones are ringing, there are crank calls pouring in, the lights went out. He kept rating and raving about the same things over and over again: machines, vaccines and me.”

The pillow mogul apparently wasn’t happy that he was the butt of Kimmel’s jokes multiple times last week, and Kimmel played a supercut of some the mentions.

“What Mike Lindell doesn’t seem to understand is I’m his biggest fan,” Kimmel said. “I have no idea what he’s doing, but I love it.”

He said Lindell was welcome to come on his show as a guest, but it has to be in person.

“I want to smell the knockwurst in his mustache,” he said.

Kimmel had one other condition.

“I would like to conduct our interview in a bed surrounded by pillows,” he said. “Just me and Mike, snuggled up side by side in a California king, surrounded by sacks of goose feathers.”

See more in his monologue ― including some of Lindell’s wildest “yellathon” moments: 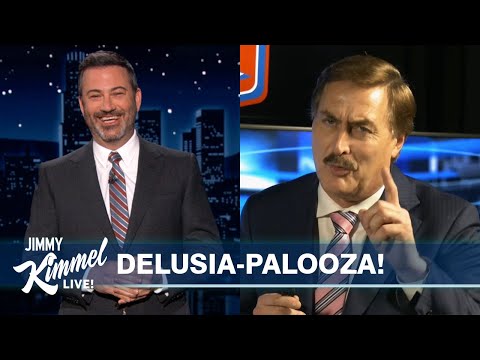