John Oliver ripped into NBC for “rewarding” President Donald Trump with a full hour of TV to himself after he pulled out of a debate with Democratic rival Joe Biden.

On the other hand, Oliver noted the network’s long history with Trump ― it was the home of his reality TV show, “The Apprentice” ― and said the stunt was “if nothing else, very much on-brand for them.”

The event sparked a few viral moments, including one in which a woman in the audience delivered an unexpected compliment to the president.

“I have to say you have a great smile,” said Paulette Dale, who later told local media she was voting for Biden. “You’re so handsome when you smile.”

“Is he? Is he really?” Oliver asked, then added:

“I’m not quite so sure about that, unless by ‘handsome’ you mean ‘looks like someone dropped their dentures into a jack-o’-lantern on Nov. 14,’ in which case you are absolutely right: The man’s got a smile that can light up a cross.”

However, as Oliver noted, the disarming introduction then transitioned into a tough question about immigration policy, leading Oliver to call it “the perfect way” to handle Trump:

The rest of the show focused on Trump’s decision to pull the United States out of the World Health Organization: 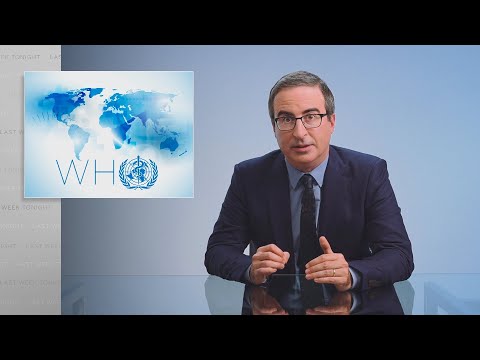