Orange Democratic Movement (ODM) Raila Odinga’s elder brother Oburu Oginga has said there is nothing that can stop the former premier from working with Deputy President William Ruto in 2022.

Dr Oburu said their differences are political and not personal and therefore the two can still work together if circumstances necessitated.

On matters impeachment of the Deputy President, Oburu said this should be initiated by Jubilee Party and other parties then consider supporting it.

In an exclusive interview with KTN, Oburu dismissed allegations that Raila was losing ground, including at the Coast where he ended a four-day tour yesterday.

Oburu said Raila was a tactful politician and an organiser whose political acumen should be underrated by anyone at their own peril.

He noted that the alliances that had started forming were too early to carry home.

“When the appropriate time comes, Raila will form an alliance and those talking now will be surprised.

“It is too early for those alliances to come, especially before we know the fate of BBI,” said Oburu. 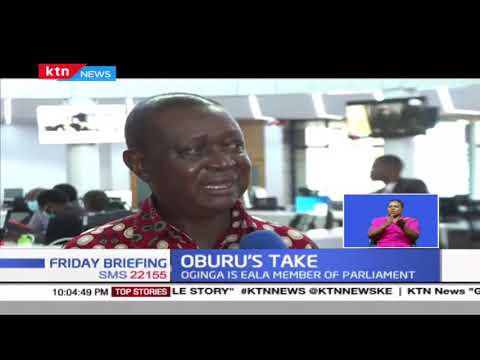 The Constitution of Kenya (Amendment) Bill, 2020, popularly known as the BBI Bill, last week got the greenlight from 43 county assemblies, surpassing the threshold of 24 counties constitutionally required to have it proceed to Parliament.On Thursday, both the National Assembly and Senate introduced the Bill amid a push to hasten the process ahead of the planned June referendum.

Yesterday, the clerks of both Houses invited Kenyans to present their views during public participation on the proposed law.

Oburu said in the absence of Wiper leader Kalonzo Musyoka and Ford Kenya party leader Moses Wetang’ula, Raila was already building political friendships with other leaders in their regions.

He dismissed the assumption that the two were part of Raila’s support base.

“If you look at those formations, how will they be sustained and taken forward when there is no identity? Even if one of them says that they want to be president, who will lead in their alliance? It is too early to have the formations, they are not sustainable,” Oburu said.

He noted that the formation does not worry the ODM leader “because when we move to the election, things will change.’’

“If you take Wetang’ula and compare him with Dr Mukhisa Kituyi who is an ally of Raila, they (Raila and Kituyi) are working together and there are other people like Wafula Wamunyinyi who have eroded the Ford Kenya leader’s base,” said Oburu.

He also pointed at other leaders in Ukambani where Wiper leader Kalonzo Musyoka is believed to hold sway.

Raila, he said, was not seeking endorsement from President Uhuru Kenyatta to bid in 2022.

He said though they were not relying on President Kenyatta, they were hopeful he would not use the State machinery against them.

Oburu claimed they had won three elections, including beating President Kenyatta twice, without the help of the State and they were confident that they will be in a better position in 2022.

“He (Raila) had won in the last three elections cleanly but he could not be the President of Kenya because the State machinery was set against him,” he claimed.

“What I mean is that now the State machinery which was used against him three times is now more friendly to him and with his support base intact, there was no way he would be defeated,” he added.

Last year, Oburu said through the Handshake, ODM now had the system and the deep State and therefore it will be easy for Raila to win the presidency.

Yesterday’s statement was an about-turn from his public address then.

He said the by-election in Matungu and Kabuchai were chaotic and should not be used as a benchmark because there was too much bribery.

Oburu said that Raila was still popular in the Coast and was planning to visit Mount Kenya region to popularise himself.

“The Coast is intact. Mombasa Governor Hassan Joho has shown interest in the presidency and if he wins the party ticket, we will support him and campaign for him to be the President of Kenya,” he said.

Oburu added that from next week, Raila will talk to Central Kenya residents and convince them, especially now that there was the Handshake between him and President Kenyatta.

He said the reason Raila is not retiring yet is that after working very hard, he would need an opportunity, at least for one term, so that he can implement the vision that he has suffered for.