Washington, DC – Tens of thousands of people gathered in Washington, DC on Friday to denounce racism, protest against police brutality and commemorate the anniversary of the 1963 civil rights march when Martin Luther King Jr made his famous “I Have a Dream” speech.

In his iconic address, King lamented “the unspeakable horrors of police brutality” and envisioned a reality, a future where his children would “one day live in a nation where they will not be judged by the colour of their skin but by the content of their character”.

Kimberly Jones, a Black woman from Illinois, was one of hundreds of marchers, lining up to enter the National Mall.

“Fifty-seven years later we are still fighting that same fight,” Jones said, “the fight for equality.

The march comes at the end of a summer rocked by nationwide protests and racial unrest over police killings of Black people – sparked by the death of George Floyd, who died in late May after a white police officer knelt on his neck for nearly nine minutes.
Civil rights activist Reverend Al Sharpton’s National Action Network began planning for the march back in June in the wake of Floyd’s death. On Friday, he delivered the keynote address in front of the cheering crowd.

“So we figured we’d let you, Black Lives Matter and we won’t stop until it matters to everybody.” 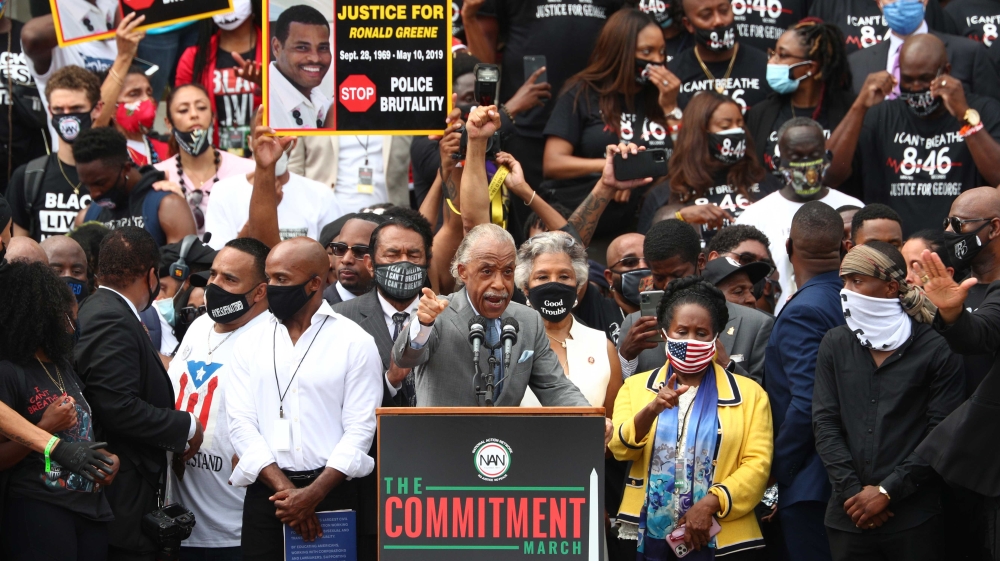 Reverend Al Sharpton addresses the “Get Your Knee Off Our Necks” Commitment March on Washington 2020 on the spot where Reverend Martin Luther King Jr delivered his “I Have a Dream” speech 57 years ago today in Washington, US [Tom Brenner/Reuters]

Martin Luther King III, a son of the late civil rights icon, also took the stage and addressed his father’s legacy as well as the issues that continue to plague this generation.

“We are courageous but conscious of our health, we are socially distant, but spiritually united, we are masking our faces but not our faith in freedom, we are taking our struggle to the streets and to social media,” King said.

“The nation has never seen such a mighty movement in a modern-day incarnation of what my father called the coalition of conscience,” he added.

The protest, called the “Commitment March: Get Your Knee Off Our Necks,” gained new urgency in recent days, after police shot another Black man, Jacob Blake, multiple times in the back at close range in front of his children in Kenosha, Wisconsin. Blake’s father and sister attended the march. The father had earlier said that Blake has been paralysed from the waist down.

After the speeches at the Lincoln Memorial, participants marched to the nearby Martin Luther King memorial, led by the families of victims of police violence.

But unlike the historic 1963 event, when more than 200,000 people took part to demand equality and an end to racial segregation, this year’s march comes in the middle of the coronavirus pandemic, a disease that has killed more than 180,000 Americans and has disproportionately affected Black people.

Participants were required to wear masks and temperature checks were conducted at the entrance. Hand sanitiser and face masks were being distributed by volunteers.

Organisers estimate some 50,000 took part in the march in Washington, DC after shuttle buses from coronavirus hotspots were cancelled. But hundreds of thousands tuned in to the virtual commemoration, which featured civil rights activist Reverend William Barber. Politicians, entertainers and celebrities were also in the lineup.

Sharelle Jackson, from New Orleans, Louisiana whose own daughter contracted the coronavirus earlier this summer, said she was determined to come, despite the risks.

“This is so important, I will be as safe as possible, wear a mask, social distance and use hand sanitiser,” she said. “It’s a sacrifice that needs to be made for the change that we require.”

The event is also taking place during a fraught political moment, following national conventions by the Democratic and Republican parties over the past two weeks.

Trump, who is running for a second term in office on a law-and-order platform, has not denounced Blake’s shooting and on Thursday announced that he has dispatched federal forces to quell the protests in Kenosha.

Succes: Since the National Guard moved into Kenosha, Wisconsin, two days ago, there has been NO FURTHER VIOLENCE, not even a small problem. When legally asked to help by local authorities, the Federal Government will act and quickly succeed. Are you listening Portland?

Democratic Vice Presidential nominee Kamala Harris recorded a three-minute video on Twitter, which was  played during the march.

She said if civil rights activists from the 1960s were here today, they “would share in our anger and frustration as we continue to see Black men and women slain in our streets and left behind by an economy and justice system that have too often denied Black folks our dignity and rights”.

“They would share our anger and pain, but no doubt they would turn it into fuel,” Harris said. “They would be lacing up their shoes, locking arms and continuing right alongside us to continue in this ongoing fight for justice.”

Water bottles and energy drinks were being distributed as groups of people, all wearing masks gathered on the grass around the Reflecting Pool on Friday, some dangled their feet in the water on a particularly hot and humid day, listening to the speeches.

Speakers talked about the importance of justice, police reform and referenced John Lewis, the late lawmaker who spoke at the 1963 march. They spoke of hope and of the importance of voting in November’s election.

Victor Radcliffe who came from Dallas, Texas, said that it was deeply meaningful to him to come on this day to demand racial equality and change, as well as reflect on King’s vision.

“Fifty-seven years ago Martin Luther King was out here, and we’re still fighting for that dream,” Radcliffe said, “but the reality is, we’re still living a nightmare.”