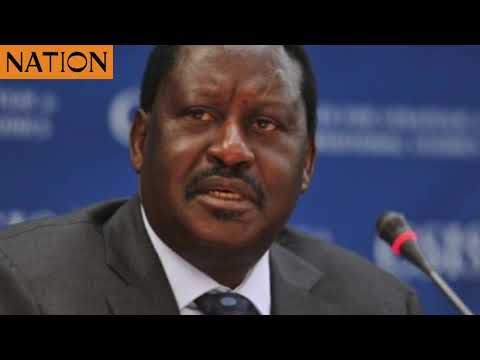 Opposition chief Raila Odinga has asked medics on strike to be more understanding to the public and the government during the Covid-19 pandemic period.

In comments that were not received well by many Kenyans on social media, Mr Odinga maintained it was not the right time to hold the government at ransom despite doctors and nurses taking oath of office to protect lives.

The opposition leader was speaking in Kisumu on Monday morning on a day that nurses and other health workers in public hospitals began their strike to press for higher pay and better working conditions.

The move has paralysed operations in various hospitals that are seeing a surge in numbers of patients infected with coronavirus.

Mr Odinga said the country is in a state of crisis at the moment, adding that at the same time, the economy is hurting because of the impact of Covid-19.

“It is not the time for doctors to hold the government at ransom yet they took an oath to protect lives. How then do you justify downing your tools when people are dying, lives which you can actually save?” Posed Mr Odinga.

He asked the medics to be realistic, saying it was not only them who are suffering but every other sector including teachers, engineers and lecturers who had lost their lives too and have been affected by the pandemic when it comes to remuneration.

“Not only doctors are dying, even the ordinary Kenyan is dying, all I am asking is they be more understanding of the current situation,” he added.

He also asked for patience saying there is a proposal to create a health sector commission to deal with issues of employment in the profession urging the health care providers to sit with the government, negotiate and agree on these issues because the government doesn’t have the funds now.

Mr Odinga was speaking after a meeting with Kisumu Governor Anyang’ Nyong’o and Council of Governors Chairman and Kakamega County boss Wycliffe Oparanya.

However, Kenyans on social media did not take Mr Odinga’s plea to medics kindly, with some bashing him for being ‘insensitive’.

For instance, one Clifton wondered about the timing of Mr Odinga’s statement, coming at a time when the medical fraternity was reeling from the death of one of their own, a 28-year-old doctor who was allegedly not paid for five months and had no health insurance cover.

You have paid the ultimate price for your service to humanity. Devastating & heartbreaking is the fact that you have left a young family,your call to all young doctors not to endanger their lives in hazardous work environments shall not be in vain.Fare thee well Dr Stephen Mogusu pic.twitter.com/6bnU8HBEHN

Another social media user going by the name Mkenya Halisi said: “No money, yet to him it is a ripe moment to hold a constitutional referendum for as little as Sh15 billion. I ask how?”

Another netizen, Mr John Ogola, wrote: “All sensible governments focus on their medical fraternity during such pandemics and Kenya is no exception. We don’t value our doctors. Shame on you all for trivialising their plight.”

Mr Tony Kavinguha, however, stated that every citizen has made the same plea to doctors and therefore Mr Odinga should not be branded ‘inhuman’ when he does so.

He however pleaded with President Uhuru Kenyatta’s government to dialogue with the medics.

Probe into US Olympic failings stunted by red tape in DC