The protestors chanted “Waiguru must go!” as they carried placards scribbled “President Uhuru Kenyatta, we are ready to fight corruption in Kirinyaga”.

The traders, who abandoned their jobs temporarily, urged the Senate to uphold Waiguru’s impeachment by the County Assembly.

“Kindly help us seize corruption in Kirinyaga,” read one of the placards.

“You were part of the NYS scandal, you’re also corrupt in Kirnyaga. Waiguru must go,” another claimed.

The demonstrators stated that the president had declared a total war on corruption and should, therefore, support Kirinyaga residents in the same way he supported Kiambu County to impeach former Governor Ferdinand Waititu.

Joyce Wakuthii, a resident in the area, argued that the governor should not hide behind her gender as a woman.

Her fate now lies with the Senate and a hearing will either affirm or nullify her impeachment.

On Wednesday, June 10, Waiguru moved to court, claiming that her impeachment was unlawful because the High Court temporarily stopped assembly proceedings over Covid-19.

Waiguru obtained a court order to block the County Assembly from impeaching her but the MCAs went on with the proceedings.

Below is a video courtesy of Daily Nation; 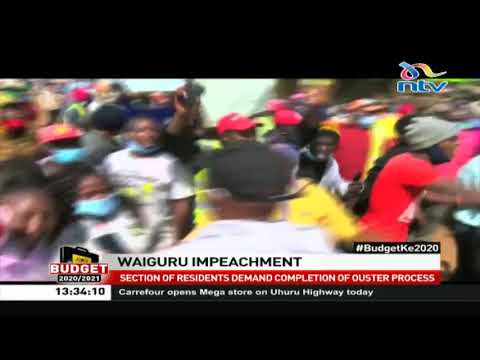